It is possible to visually distinguish between high-CBD and high-THC cannabis strains just by looking at the physical properties of the plants as they grow, according to new research from scientists at the University of Alberta and two Canadian bioscience companies, PBG BioPharma and Egret Bioscience Ltd.

Published in HortScience, the journal of the American Society for Horticultural Science, this new study details the results of extensive morphological trait analysis in high-CBD, high-THC, and intermediate cannabis strains. The researchers found that high-CBD strains are generally a much lighter shade of green and have narrower leaflets than their high-THC or hybrid counterparts.

Chemical and genetic analysis are still the most accurate measurements of a strain’s cannabinoid content, the authors say, but this new understanding of the cannabis plants’ physical trains could help growers to get a good first read of their crop’s qualities as it grows, without having to use destructive and expensive testing methods.

High-CBD plants are generally light in color with narrow leaflets

To identify any traits that might be indicative of the plant’s chemotype – defined as either being CBD-dominant, THC-dominant, or an intermediate value – the study looked at variation in 21 cannabis cultivars grown in a commercial greenhouse.

The researchers say that found 30 such different morphological traits. These included qualitative traits, such as a width-to-height ratio, and quantitative measurements, including the number of leaflets and the general appearance of the inflorescences and trichomes on the plant.

According to the study authors, this is the first time such a profile has been assessed for CBD-dominant and intermediate cultivars and also the first time that the characteristics of the plant inflorescences have been considered. 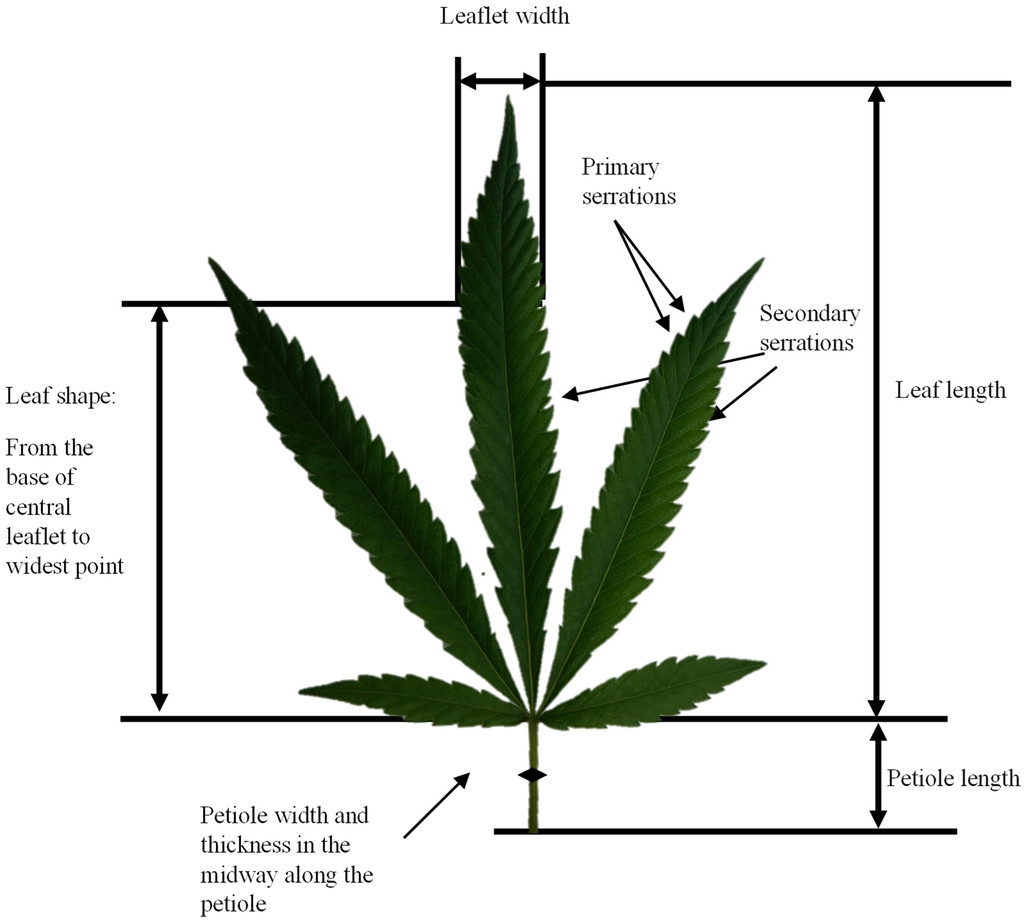 (Examples of leaf traits measured in the study. Reprinted from Jin et al., 2021 with permission.)

The researchers found high-CBD strains generally were a much lighter shade of green and had narrower leaflets than their high-THC counterparts. High-CBD plants also tended to have more primary and secondary serrations on their leaves and have looser inflorescences. The researchers also noted the high-CBD plants exhibited greater signs of resistance to the Botrytis cinerea pathogen, which can cause gray mold in the inflorescences of vulnerable plants.

In contrast, the high-THC strains were a dark green with wider leaflets, fewer serrations, large and compact inflorescences, and were quite susceptible to Botrytis cinerea infection. Intermediate cultivars fell elsewhere in this spectrum of morphological traits; many were a deep-green similar to the high-THC strains, but had medium-wide leaflets, more serrations, compact inflorescences, and less dense and less resinous trichomes.

“If we had included more strains in this study, the conclusions would be more robust,” study co-author Dan Jin, a research scientist at PBG BioPharma and graduate research assistant at the University of Alberta, told Analytical Cannabis. “However, the same size was limited by legal restrictions and the willingness of licensed producers to provide their proprietary genetics.”

“The strains represented in this study may just reflect the preferences of cultivators in the Canadian market,” Jin explained. “Legal germplasms of CBD dominant and intermediate strains are relatively limited, and within THC dominant strains, growers naturally prefer those that produce large and compact inflorescences that favor resin production.”

Still, despite the somewhat limited dataset provided by the 21 cultivars in the study, canonical correlation analysis was still about to assign individual plants to the correct chemotype (i.e. CBD-dominant, THC-dominant, or intermediate) with 93 percent accuracy.

“We hope this paper can attract more academic interest in the morphological aspects of modern cannabis strains,” she added.

A short history of cannabis nomenclature

In the past, cannabis strains were generally categorized as being one of two cannabis species depending on their geographic origins; Cannabis indica plants were intoxicating varieties of cannabis from India that were used in hashish and fiber production, while the Cannabis sativa species was native to Europe and western Eurasia and more similar to modern day hemp.

The terms indica and sativa are still used to describe cannabis plants today, though decades of crossbreeding to achieve the most desirable THC content and appearance has meant the terms no longer accurately correlate to the actual genetics of the plant in question. Instead, sativa strains are generally understood to have tall and narrow leaflets whereas indica strains have much wider leaves. Consumers also attest to sativa plants producing a more energetic high and indica strains a more chilled-out and sedating experience.

“Instead of ‘sativa vs indica,’ this paper focused more on the differentiation between three chemotypes: THC-dominant, intermediate (with intermediate THC and CBD levels), and CBD-dominant,” Jin explained. “Even within the current sativa and indica terminology, the strains described are still mostly THC dominant. This would be an interesting topic for a follow-up experiment, if there is a way to gather sufficient numbers of sativa and indica strains to test the labelling.”

In their paper, the researchers explain that while identifying different phenotypic differences between plants is essential for being able to differentiate between plant species, this has been largely ignored for modern cannabis species so far. Descriptions that do exist are often vague, they say; leaflets can be described as “broad” but specific dimensions aren’t given, for instance.

With the publication of this study, Jin and her colleagues hope that it will prompt more academic interest into the study of cannabis from a morphological point of view.

“Cannabis is a special herbal medicine with a complex history of breeding and usage,” she added. “Using science to prove or overturn the historical narrative is always exciting. We believe that it will be essential to combine both user experience and scientific data for supporting cannabis as evidence-based medicine.”