For producers of cannabis oils and edible products, precise manufacturing is key. While the heating of cannabis flower and vape oils handily decarboxylates the cannabinoid acids into their more biologically active forms – tetrahydrocannabinol (THC) and cannabidiol (CBD) – items that are not heated during consumption need to be decarboxylated carefully by producers first, before being finished and packaged into their final forms.

But how do you know if you are efficiently decarboxylating your product to produce maximal amounts of THC and CBD?

A new comparative study from researchers at New Zealand’s government innovation agency Callaghan Innovations has identified ideal decarboxylation conditions for cannabis flower that maximize the output of THC and CBD in the final product.

Published in the journal Industrial & Engineering Chemistry Research, the researchers used two kinetic models to study the effects of different variables, and found that longer reaction times and lower temperatures were most favorable for CBD conversion, while a shorter reaction at higher temperatures produced maximal concentrations of THC.

The chemistry behind cannabinoid formation

Although THC and CBD are normally thought of as the two major cannabinoids present in cannabis, there is actually very little of either compound present in raw, freshly harvested material.

All cannabinoids in the cannabis plant start out their life as cannabigerolic acid (CBGA), an acidic molecule affectionately dubbed the “mother of all cannabinoids.” As the plant grows and matures, enzymes unique to each cannabis strain begin to convert amount of this CBGA into amounts of other acidic precursor compounds: tetrahydrocannabinolic acid (THCA), cannabidiolic acid (CBDA), and cannabichromenic acid (CBCA). 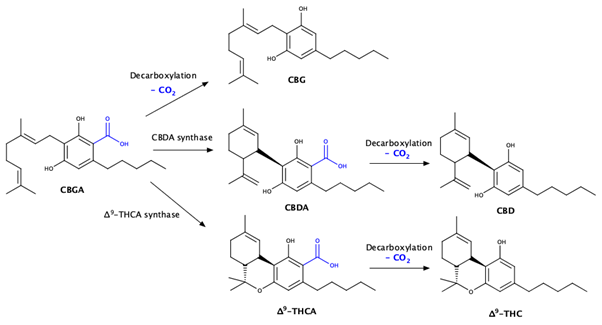 The decarboxylation of CBGA into CBG, CBD, and THC. Source: Analytical Cannabis.

These acidic compounds are non-intoxicating, but they are relatively unstable. THC and CBD are readily formed from THCA and CBDA when the plant material is exposed to heat or some other force capable of triggering decarboxylation, where the acidic molecule loses its carbonyl group and converts into the neutral form of the cannabinoid.

This is why you cannot chew on some fresh cannabis and expect to get high; the heat from smoking or vaporization is what decarboxylates the acidic precursors in cannabis flower to form the more biologically-active cannabinoids that can cross the blood/brain barrier and exert their psychoactive and therapeutic effects.

Despite the importance of the decarboxylation reaction in optimizing the yield of biologically active cannabinoids extracted from the plant, there are very little data on this reaction that is currently publicly available, the New Zealand researchers say.

In their new study, the researchers looked to detail the effects of several parameters – including temperature, reaction time, oxygen exposure, and the volume of plant material – on the decarboxylation of THCA, CBDA, and CBGA as hemp plant material was heated. They studied a temperature range of 80-160°C and reaction times of between five minutes to two hours. They then fitted the subsequent data to two different kinetic models in order to predict the optimum conditions for each reaction.

The ideal reaction conditions to maximize conversion of THCA into THC involved high temperatures (160°C), but only for around seven minutes. Beyond this, the THC concentration begins to fall dramatically, as the cannabinoid is lost to evaporation or starts to break down into cannabinol (CBN) and other unidentified byproducts.

In contrast, the kinetic model suggests that the ideal conditions to maximize CBD concentration are heating at 80°C for around 25 hours. But heating at 90°C for half as long would also be suitable, as this method halves the total reaction time with only a small drop-off in maximum final CBD concentration.

In a second set of experiments, the researchers heated the hemp material at 140°C inside sealed foil pouches that had been flushed with nitrogen. In a second test, the team used the same temperature and hemp mass, but placed the material in an open beaker exposed to the air.

The samples in the sealed bags produced only very minimal amounts of CBN, a known oxidation product of THC, compared to the samples that were heated in open air. Interestingly, the decarboxylation of THCA in the nitrogen atmosphere pouches occurred faster than in those exposed to the air, and the degradation of THC and CBD into other unwanted byproducts slowed down significantly.

This would suggest that extraction methods such as supercritical CO2 extraction, which by nature exposes the plant material to very little oxygen in a sealed system, could be a useful way to preserve as high a concentration of neutral cannabinoids as possible.

The researchers also assessed whether the amount of hemp being decarboxylated would have any effect on the results. They found that greater volumes of material generally resulted in a slower rate of reaction. They attribute this effect to the slower heat transfer rates through a deeper bed of organic material, and possibly also the reduced amount of surface area that would be exposed to air circulation and evaporation. To optimize the decarboxylation reaction, then, producers can consider heating their plant material in smaller batches.