The way that experts categorize and talk about different families of drugs is often very complex and verbose. There's good reason for this: drugs are complicated compounds and even two drugs from the same broad category may exert very different side-effects.

But when it comes to harm reduction and drug education initiatives, having a simpler way to talk about drugs and group together their effects and harms can be extremely useful.

Now, researchers at Newcastle University and the University of Liverpool, together with experts from the harm reduction and drug checking service provider the Loop, have unveiled a new visual tool to make sense of drug classification.

Published in the journal Drugs: Education, Prevention and Policy, the new “Drugs Venn” model provides a less technical classification of drugs as compared to the earlier Drugs Wheel and Drugs Pyramid models. The Venn also allows for different groupings of drugs based on their effects and how these effects overlap. The experts hope this new model can be used in a more broad range of drug education and harm reduction settings.

The tricky problem of drug taxonomy

There is a general tendency to underestimate the huge volume of different drugs that are available on the illicit drug market. The late 2000s saw an explosion in New Psychoactive Substances (NPS), defined by the United Nations Office on Drugs and Crime as substances of abuse that were not covered by the 1961 Single Convention on Narcotic Drugs.

These NPS are a broad spectrum of synthetic and plant-derived drugs, often marketed as “legal highs”. At their height, around two new NPSs were being identified on the illicit market every single week, with this slowing to around one per week by 2018.

“The drug market exploded in the 2000s with one or two new drugs being identified every week but what do all these hundreds of New Psychoactive Substances actually do?” ​​ Fiona Measham, a professor of criminology at the University of Liverpool Chair and director of the Loop, said in a statement.

“Given that there is no perfect way of classifying drugs, the challenge for academics and practitioners is to create and communicate classifications with practical utility in the real world.”

“The three models discussed in this paper – the Drugs Wheel, Pyramid and Venn – provide an opportunity to jump start these risk communications,” Measham continued. “And with The Loop, I have seen how constructive they can be.”

The Drugs Wheel was the first simple conceptualization of drug taxonomy, created in 2012 as a response to the proliferation of NPS and the rapid developments in legislation related to them.

The Wheel introduced six clearly defined drug categories — stimulants, empathogens, hallucinogens, dissociatives, cannabinoids, depressants, and opioids — and featured inner and outer rings that could be used to highlight the legal status or relative popularity of specific drugs in these categories. 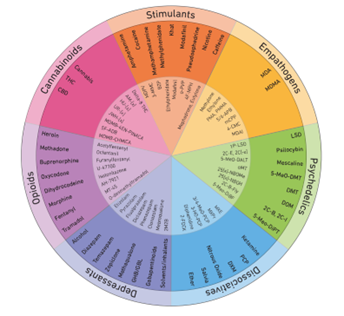 The Drugs Wheel (2022) displaying established drugs in its outer ring, and NPS in the inner ring.

The Drugs Wheel has been adapted for use in schools and other drug education initiatives as an interactive game and is often displayed by the Loop alongside its on-site drug testing service stations.

Building on the utility of the Wheel, a Drugs Pyramid was later created as a more intellectual exercise in comprehensive drug taxonomy. While the Wheel is intentionally very simple, the Pyramid allowed for an expandable, tiered model that could be adapted to be more or less technical as desired.

“There are literally hundreds of different types of drugs being sold on the market, and while their differences in chemical structure change their effects, there can be considerable nuances between them,” said Guy Jones, a senior scientist at the Loop.

“Trying to find a classification system that succinctly and meaningfully separates the drugs without causing confusing overlaps between categories becomes a big task”.

The new Drugs Venn model seeks to combine the less-technical terms used in the adapted Drugs Pyramid with several smaller Drug Wheel-like wheels, while also updating the broader drug categories to better align with current naming conventions. The idea of presenting this as a Venn diagram was also partly inspired by the previous four-category McCandless Venn, the researchers say.

The result is an overlapping Venn diagram-style model, with three broad categories of psychedelics, stimulants, and depressants. Drugs are sorted into smaller groups based on their effects, with many of the previously used technical group names replaced by simpler versions, such as “LSD-like” for the lysergamides.

“Drug effects are a messy business, and a taxonomy such as the Drugs Wheel aims to provide some clarity,” explained lead author Mark Adley, a PhD student at Newcastle University.

“However, no model is perfect, and by presenting different models within this paper we hope to illustrate how it is the very differences between models of drugs classification that can lead to some illuminating discussions about drug effects.” 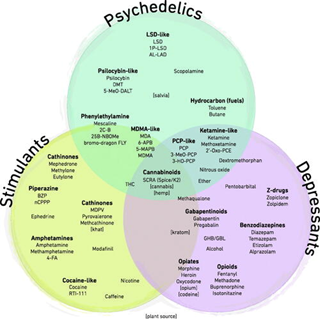 
The researchers hope that the new Drugs Venn can provide a less-technical, de-chemicalized way to classify drugs, one that more simply reflects the often-overlapping nature of drug effects while still providing enough utility to be used in practical, educations, and treatment settings.