The next generation of sustainable bioplastics could be made from CBD, a new study suggests.

Published in ACS Applied Materials & Interfaces, researchers from the University of Connecticut and Purdue University report the creation of a new CBD-based bioplastic material. The researchers say that this is the first reported polymerization reaction to involve cannabinoids in this way.

Free-standing films made from this CBD-based bioplastic performed surprisingly well in stretch-ability tests and were able to be easily melt-processed to form detailed new shapes. In light of these properties, the researchers say this CBD-based polymer could have future applications in medical implants, food wrappers, and more.

Currently, the majority of CBD research has focused on its medicinal benefits as an isolated compound or as part of a cannabis oil. While hemp fiber has garnered attention as a sustainable material, relatively little time has been spent investigating the potential CBD itself may have in the world of materials science.

In this latest study, researchers carried out a polycondensation reaction between CBD and adipoyl chloride to form a new thermoplastic polyester, poly(CBD-Adipate). The polymer strands created in this reaction were then redissolved in a 1,4-dioxane solution, mixed in a centrifugal mixer, and cast on a glass substrate to form a polymer film.

The resulting poly(CBD-Adipate) film was then subjected to a range of physical tests to assess its properties. The researchers found the film to have a broad melting temperature between 100-260°C and an “exceedingly high stretch-ability” despite the moderate molecular weight of the polymer. 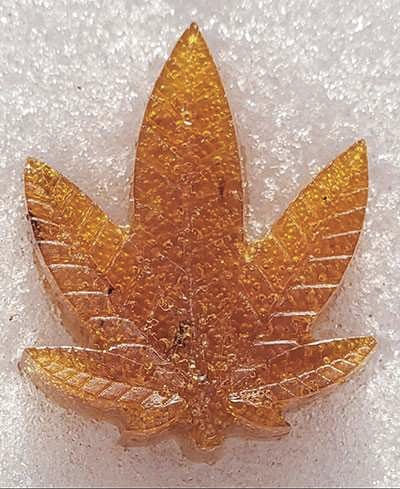 This melt-processable CBD-based polymer looks and works like a typical piece of plastic, with a dash of antioxidant activity. (Credit: Adapted from ACS Applied Materials & Interfaces, 2022, DOI: 10.1021/acsami.2c05556)

To demonstrate the melt processability of this new polymer, the research team placed an amount of finely ground poly(CBD-Adipate) into a small-but-detailed hemp leaf-shaped silicone baking mold, and heated it in a convection oven at 110°C for around 30 minutes. The resulting bioplastic measured approximately 5 centimeters (cm) by 3 cm, and was able to retain the fine details of the baking mold.

Poly(CBD-Adipate) performs as well as other bioplastic

Poly(lactic acid), or PLLA, is currently viewed as one of the best bioplastics available. It is normally derived from fermented plant starches, such as corn, cassava, sugarcane or sugar beet pulp, and its production can easily be managed at the industrial scale. PLLA accounts for nearly one-fourth of all bioplastic production and is used extensively in textiles, packaging, and biomedical devices.

To test the suitability of poly(CBD-Adipate) for similar applications, the researchers carried out a number of assays on both poly(CBD-Adipate) and PLLA free-standing films, as well as a film made from a 50:50 blend of the two biopolymers. All three films were found to have no measurable amount of cytotoxicity, and no significant differences in the metabolic activities of stem cells cultured on each film.

Given the documented anti-inflammatory effects of CBD, the researchers also cultivated bone marrow macrophages on each film and studied whether there were any resulting changes in pro-inflammatory cytokine expression after 24 hours. No significant changes were seen, which the researchers theorize may be due to the CBD molecules being locked into the polymer structure and therefore being unable to bind to endocannabinoid receptors.

Based on the lack of cytotoxicity, ease of melt processing, and antioxidant effects of poly(CBD-Adipate) films, the researchers believe that this biopolymer could be useful for biomedical materials, food storage, and “any commodity-type materials currently made from PLLA without the need for additional antioxidant additives.”

Hemp: a sustainable and cheap feedstock

In the interest of reducing environmental impact and ending our reliance on fossil fuels, biopolymers made from renewable feedstocks have become an area of significant interest for academics and industry. Such biopolymers can be made from a variety of feedstocks, including plant starches, natural proteins such as collagen or gluten, and microorganisms.

Following the passage of the 2018 Farm Bill, which federally legalized industrial hemp production, hemp prices in the United States have plummeted dramatically. Pre-legalization, hemp material could cost between $40 to $45 per pound; nowadays, this is more like $2.50 per pound.

The falling price of hemp has now made it a realistic avenue for more applications than ever before, including as a feedstock material for biopolymer production. As the researchers of this new study highlights, CBD is just one of around 75 cannabinoids that occur naturally in the hemp plant that have a suitable chemical structure for forming polyesters. Indeed, the researchers also synthesized a polyester from cannabigerol (CBG) in this study. However, it was unable to produce a free-standing film due to its low glass transition temperature.

Further research into this new class of poly(cannabinoid)s could bring about even more interesting sustainable material alternatives. Continued investigation of poly(CBD-Adipate) and its properties may also prove valuable. The researchers suggest that its antioxidant activity could be improved further, for example, by incorporating phenol compounds in a similar way to what has been reported for other plastics.