Complete the form below and we will email you a PDF version of "New Saliva Test Can Detect Cannabis Intoxication in 5 Minutes, Say Researchers "

A new portable saliva testing kit can detect THC in less than five minutes, according to its developers.

The test’s developers claim that their device is superior to many existing methods for detecting THC, which are often cumbersome and can only detect if a person has used cannabis recently or not, not how much THC is their system.

The test, known as EPOCH (express probe for on-site cannabis inhalation), was developed by a cohort of researchers, many of whom were based at Massachusetts General Hospital, Harvard Medical School.

The EPOCH kit consists of an oral swab, a processing portion, two sensor cartridges, and a smartphone app. Once a cannabis consumer has swabbed their mouth, the swab is placed into the processing kit, which contains gold nanoparticles coated with THC antibodies. The antibodies bind to any THC present, and the resulting concentration of bonded THC is detected by the sensor cartridge. 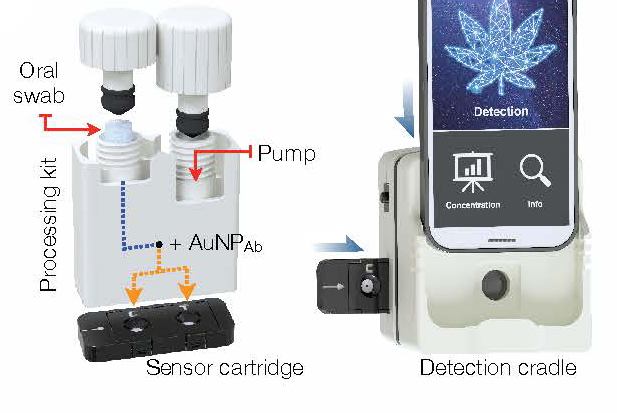 EPOCH’s developers say the test is unaffected by the consumption of other confounding factors, such as coffee, alcohol, or tobacco.

To assess the accuracy of their handheld test, the developers trialed it on 86 participants, half of whom had recently consumed cannabis. The EPOCHs identified oral THC levels in all 43 samples. Moreover, the tests detected the depleting concentrations of THC in the participants’ saliva over the 12 hours since they last smoked cannabis.

Published in Science Translational Medicine, the study concludes that the EPOCH test is a “cost-effective, versatile analytical platform with applications in roadside and emergency situations as well as workplaces, sports, and laboratories.”

The authors of the paper also acknowledge that their study is limited by the small number of participants. Any future studies, they say, would benefit from more participants and more cognitive tests alongside the THC detection test.

“As in the case of alcohol testing, combining molecular and cognitive tests would enable a more accurate assessment of drug-induced impairment,” the authors wrote.

Which test to choose from?

As cannabis legalization has swept across North America, so have concerns that “high drivers” could become a greater danger to the public.

Yet most current standard tests for cannabis intoxication can’t tell whether a person is actually high or not, just whether there is THC in their system.

These tests rely on a sample of blood, urine, or hair from the suspected individual. These are then typically put through a mass spectrometer machine, which breaks the samples down into their atoms to precisely identify which chemicals they harbor.

The developers of the EPOCH test say that their method is a better, more mobile alternative. But they aren’t the only ones searching for an improved way of identifying cannabis intoxication.

One breathalyzer prototype, developed at the University of Pittsburgh in 2019, uses carbon nanotubes, 100,000 times smaller than a human hair, to “detect THC at levels comparable to or better than mass spectrometry.”

Another team from the University of Texas at Dallas developed a saliva-based THC test in 2020. Much like the EPOCH test, this method uses sensor strips coated in antibodies that bind to THC.

“We used the antibody so that we could really only look at the needle in the haystack,” Shalini Prasad, a professor of bioengineering at the University of Texas at Dallas, said in a statement at the time. “This is the first demonstration of a prototype device that can report both low and high concentrations of THC in a noninvasive, highly sensitive and specific manner.”