Complete the form below and we will email you a PDF version of "Cannabis Farmers Should Routinely Test For Heavy Metals, Say Researchers"

The cannabis crop’s natural ability to accumulate heavy metal elements from the soil poses a threat to the health of consumers, according to a new scientific review.

To prevent plants from accumulating high levels of these dangerous metals, cannabis farmers should perform regular tests on their farm’s air, water, and soil, say researchers.

It’s been estimated that heavy metals like cadmium, mercury, and lead are naturally present in small quantities in a third of arable land around the world. Recent fires and local pollution can increase the levels of these metals, but most soils are still considered safe for human exposure.

However, certain crops can accumulate heavy metals from the soil and store them in their leaves and stems. Cannabis, in particular, is a highly efficient accumulator of heavy metals; the plant has even been used to cleanse land with Chernobyl-like levels of radiation.

Now, an international team of researchers have warned that this natural ability of marijuana's to absorb heavy metals could be putting cannabis consumers at risk.

Published in Toxin Reviews, their paper reviewed 25 pre-existing studies of cannabis and heavy metals. It concluded that, while cannabis shows potential as a tool for soil remediation, its tendency to soak up heavy metals “does pose a threat to the consumer base.”

“Cannabis consumed in combustive form represents the greatest danger to human health, as analysis of heavy metals in the smoke of cannabis revealed the presence of selenium, mercury, cadmium, lead, chromium, nickel and arsenic,” Louis Bengyella, an assistant research professor of plant science at Pennsylvania State University and lead author of the review, said in a statement.

“It is disturbing to realize that the cannabis products being used by consumers, especially cancer patients, may be causing unnecessary harm to their bodies.” 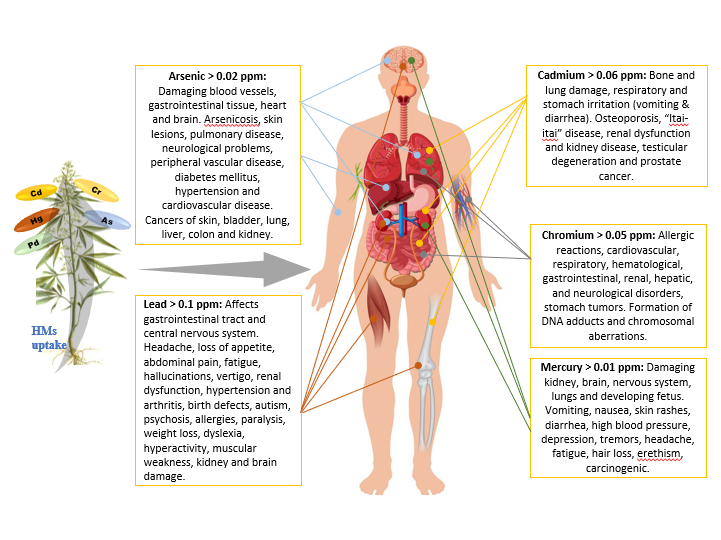 So, to help prevent cannabis consumers being exposed to dangerous levels of arsenic, nickel, and other heavy metals, Bengyella and his colleagues wrote a list of primary recommendations for growers in their review. Farmers should ideally:

pH, in particular, can a be good indicator of the heavy metals present in soil, according to the researchers. Mercury is known to accumulate more in the leaves (at around 0.015 parts per million, ppm) and roots (at around 0.038 ppm) of cannabis plants when grown in acid soil more than in basic soil.

The researchers also went further and listed seven advanced recommendations that take into account laboratory research. According to this list, farmers should also:

With these practices in place, cannabis crops will be less likely to soak up heavy metals and pose a health risk to consumers, say the researchers.

“The problem is at the level of the consumer who uses cannabis products, but the solution must come at the agricultural level,” said Bengyella. “We believe that is where we should hammer hard and solve the problem.”

The presence of heavy metals in cannabis products has been a growing concern in the legal sector in recent years.

Certain products have been recalled by state regulators due to unacceptable levels of cadmium, and recent research has shown that metals like chromium, copper, and lead can, over time, leach out from the hardware of vaping devices into cannabis vape liquids, and thus into the aerosols they produce.

Most US states with legal access to cannabis only require certified labs to test for four heavy metals: lead, mercury, cadmium, and arsenic.

Speaking to Analytical Cannabis earlier this year, the heavy metals expert and cannabis industry advisor Rob Thomas outlined the current landscape of heavy metals regulations in the US cannabis sector.

“The vast majority [of US states] just regulate the big four [cadmium, arsenic, lead, mercury]. There are a couple of states which throw in additional elements, like my state of Maryland, which also regulates selenium, silver, barium, and chromium, while New York includes nickel, chromium, antimony, zinc, and copper. But there’s no momentum to increase that list.”

“The only side of it which is gaining attention is regulating cannabis vaping devices, which is completely different because the vaping liquids are corroding internal metallic components, which has nothing to do with what elemental contaminants are actually in the cannabis product being vaped.”

Come January 1, 2022, all cannabis labs operating in the state of Colorado will be required to test cannabis vapor for heavy metals – a first for US states with legal access to cannabis.

Speaking to Analytical Cannabis earlier this year, Kyle Boyar, vice chair of the American Chemical Society’s Cannabis Chemistry Subdivision [CANN], praised the initiative of Colorado cannabis regulators, but expressed concern that state labs were being asked to test cannabis vapor when no standard method for doing so exists.

“It’s a great idea and I think it’s very important that we do this,” Boyar said. “I mean, people are using this [cannabis] as medicine – they’re already immunocompromised, many of them – so we really should be doing this.”

“But, if you have no protocol established and you don’t have validated methods, then you’re really asking them to do something that’s really not going to give you repeatable results. And that’s what we’re hoping to get towards, this consistency from lab to lab.”