What is a Capital Raising Strategy and Why Should You Have One for Your Cannabis Startup?

Complete the form below and we will email you a PDF version of "What is a Capital Raising Strategy and Why Should You Have One for Your Cannabis Startup?"

A capital raising strategy is a long and short-term plan to determine who, what, when, where, why, and how your company will obtain the outside funding needed to be successful. There are basically two approaches that can be utilized in planning for your capital raise. You can attempt to raise all the money needed in one round or plan on setting up multiple rounds. You will then need to coordinate with legal counsel regarding what type of securities regulation will work best to perform the raise.

Trying to raise all the capital that will ever be needed in one round is tempting for many founders because of the simplicity it offers. In theory, it means that once the capital raise is concluded, the founders can focus on running the business instead of participating in further capital raising activities. However, in my experience, this “go broke or bust” strategy is almost never successful.

Early-stage companies are usually unable to rationally sustain the business valuation needed to successfully accomplish this approach. Further, this approach will ultimately cost you more in equity than a multiple round capital raise because your company’s bargaining position is at its weakest in the early stages. Investors also tend to have many concerns about the venture being extremely high risk at an early stage, which is why it is very difficult to raise capital for a newer company. Investors also tend to favor the accountability and control that comes with multiple rounds because capital is only released in tranches based upon achieving pertinent milestones.

The only startups that tend to successfully raise a large amount of initial capital in the cannabis space tend to have substantial tangible assets and/or celebrity founders who usually have an extensive track record of prior successful exits. In most cases, early-stage venture valuations simply cannot sustain a “go broke or bust” approach to the capital-raising process. Having a considerable capital infusion all in one round also tends to produce tremendous waste and inefficiency as seen in some of the larger publicly traded cannabis companies.

Although more challenging, taking the time to establish a well-planned multiple round capital raise tends to yield the best results in the shortest amount of time. This type of strategy also prepares you at the onset for the typical investor situation where the investor tends to commit only a smaller amount of capital for their first investment into your company. The investor will then invest further capital in larger amounts and sometimes even bring other investors into the deal once they are satisfied that your agreed-upon milestones can be achieved. Doing a conventional multiple round strategy also means you can raise more capital with less dilution to the founders’ ownership stakes because each subsequent capital round gives you greater leverage in your investor negotiations as there is less perceived enterprise risk.

As your company advances into each round of its capital raise different capital sources will become relevant. The diagram below shows what funding sources are the most appropriate at each round. There are of course exceptions to every rule, but time is something startups never have very much of, so it is critical to be as targeted as possible when determining what sources to pursue. The diagram purposely excludes capital aggregators such as investment banks because they do not manage any funds, instead, they pursue these same sources on your behalf. 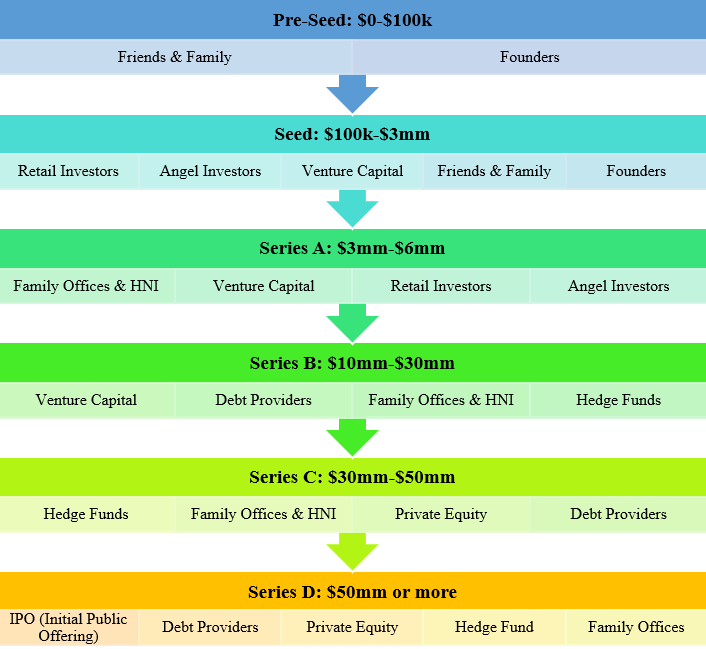 The pre-seed round is when your cannabis venture literally lives on only a notepad, PowerPoint, or consists of a few pleasant conversations with a close group of friends. It is rare for companies to raise any capital at this point beyond investments from the founders or close friends and family who are familiar with the founders on a personal level. This round can typically raise up to $100k.

The seed round is where the founders have usually developed an MVP (minimal viable product). Ideally, the product is on a clear path towards demonstrating product-market fit usually demonstrated by showing a willingness to pay on the part of the intended consumer. This round can usually raise somewhere between $100k to $3mm. The question you need to ask in laying out a strategy for the seed round is how much it will take to be revenue-neutral (when the enterprise can exist without outside capital). Furthermore, how much will be needed to do any additional market research or product refinement? This is the last chance to get everything in order before scalable growth is expected.

The series A round is where the product or service is now positioned for rapid growth. The product/service is expected to be optimized for market fit. In this phase at least 30 percent of the raise should be allocated for sales and marketing. This is where your milestones should focus on what is needed to ensure rapid growth. This round is intended to raise roughly $3mm to $6mm but can be used to raise less if needed.

For the series B and later rounds, the analysis is like the series A in terms of structuring your plan with the added caveat of planning for potential M&A opportunities that align with your established core competencies. Some companies will be acquired by the series B or later rounds. Others will go public or be acquired by large private capital sources. The focus should be on planning in detail for your seed round through the intended series A. Too much will change from the time a venture gets from its seed to series A to warrant extensive planning of later rounds beyond a general “exit strategy.”

After determining your expected capital needs you should discuss with your securities lawyer what type of capital raise regulation will work best. There are many different options such as regulation A+, regulation C, regulation D, etc. each with different tradeoffs. Please consult with your attorney to determine which approach will work best for you. Although securities lawyers are often very busy and can be difficult to get a hold of on short notice, they must be included in your capital raising process. The civil and criminal consequences for violating securities laws can be very severe at both the state and federal level.

A capital raising strategy is critical to ensuring a company’s economic success. Although you can attempt to raise everything needed in one round, it is rarely a viable option. Using multiple rounds is generally the most effective means to secure capital while preserving the most equity for the founders.