The Research Revealing the Secrets of Hot Hemp

Hot hemp is the scourge of every hemp farmer. Months of costly watering, pest control, and soil management can all be for nothing if their crops go “hot” and produce enough THC to breach the 0.3 percent federal limit. Because as soon as that happens, the crops are considered federally illegal cannabis and are liable for destruction.

It’s the concern that keeps hemp farmers up at night. So what can they do to avoid it happening to their crops? Anecdotally, many growers have blamed the weather and other environmental factors for their hot hemp hardship. But, if cultivating hemp outside, there’s not much a farmer can do about the weather.

Fortunately, it seems the climate isn’t the problem after all. Across several studies in recent years, a research group at Cornell University, New York, has demonstrated that the hot hemp phenomenon is almost entirely caused by genetic factors.

How can they be so sure? And if environmental factors are almost irrelevant, which varieties of hemp should farmers opt for? Analytical Cannabis spoke with Jacob Toth, a graduate student at Cornell University’s College of Agriculture, to find out.

Hot hemp, I loathe you so

“You want to make sure that you’re growing chemotype-three plants,” said Toth, cutting straight to the chase.

“So we figured out why so many plants were spiking or at very high levels of THC, and that’s due to this genetic factor. They were just not bred to the standard they should have been.”

It may sound obvious, but it seems the key to avoiding THC in hemp crops is avoiding the genes responsible for THC production. But it’s not the whole story. Chemotype-three crops can still breach the federal 0.3 percent THC limit if they produce too much CBD, according to Toth. So farmers should test their plants’ CBD levels regularly and be on the watch for high readings. 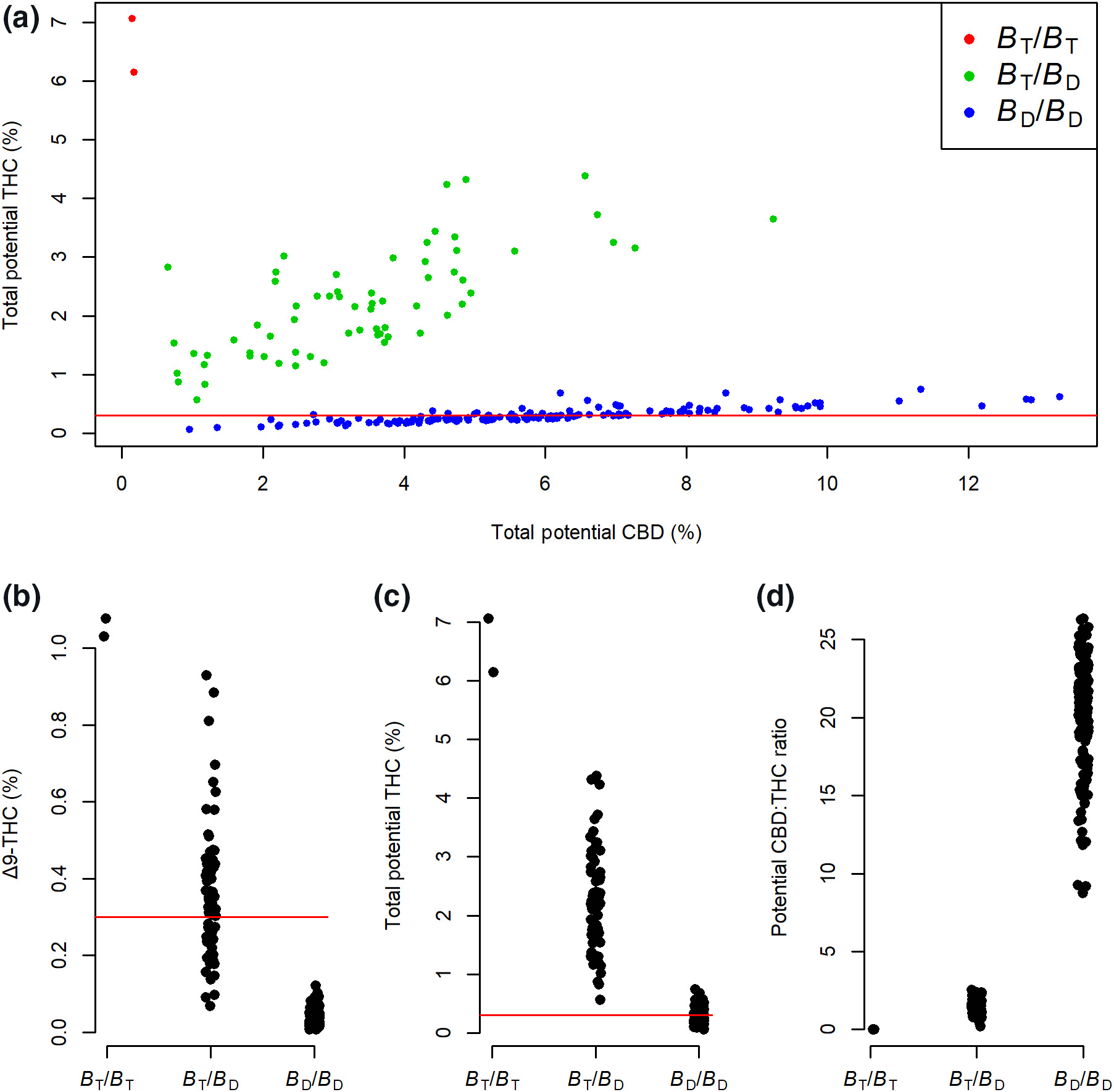 “We’re seeing you have to stay below around an 8 percent CBD level, or else [the hemp] will get higher than 0.3 percent THC, even if it’s chemotype-three,” said Toth. “So that’s what we’ve been telling farmers.”

Alternatively, Toth says that farmers can opt to grow grain- and fiber-type hemp. Normally farmed for products such as hemp bags and hemp clothes, these industrial crops seem to keep their THC levels in check. However, this THC consistency comes at a cost of CBD levels, which the crops naturally keep low.

The mentioned experiments took place in 2018. But while Toth and his team at Cornell had seemingly proven that genetic factors could heavily influence the CBD:THC ratios of hemp plants, they hadn’t quite disproved that environmental factors, such as long flowering periods and poor soils, were irrelevant. That study took place in 2019.

“So in 2019, we ran a stress trial,” Toth told Analytical Cannabis. “We had one field and we stressed the plants in different ways. We had our control plants grown under best practices, we inoculated some with powdery mildew, we damaged some with a weed whacker, we flooded the plants, we sprayed ethephon [a plant growth regulator] on the plants […] and we sprayed herbicide to really try to kill them.”

“The stresses could potentially affect the total THC,” he added. “For instance, the herbicide-treated plants had lowered total THC. That’s not surprising, the plants were nearly dead.”

Toth’s extensive and thorough trial seemed to disprove the notion that environmental factors could trigger hemp to go hot. And although there are still a few environmental variables left to study, Toth and his team are confident that their genetic hypothesis will remain sturdy, should they ever manage to test the remaining factors.

“Some people have suggested that things like heat and drought could affect [hot hemp] and we weren’t in a position to artificially heat plants in the field,” he said. “We actually attempted a drought trial; we set up a big tent over the plants and the big tent blew away. So unfortunately, we couldn’t try that one.”

Hot hemp studies of the future

Beyond further environmental tests, the Cornell hemp team would like to validate its genetic theory with some gene-editing experiments. But it might be some time before these tests can be carried out.

“So we are quite confident that the major source of THC in chemotype-three plants is this off-target activity of the CBDA synthase, based on this natural knockout work [genetic studies] that we’ve seen,” said Toth. “But what we’d really like to do is confirm this with transgenics.”

This kind of study would involve inserting and removing the THCA and CBDA synthase genes from hemp crops and then comparing the plants’ eventual THC levels.

“If we reintroduce the CBDA synthase [gene], we would expect to see that THC come back,” explained Toth. “That’s going to be the knockout experiment to prove this hypothesis. And we’re working on it but don’t have any results just yet.”

In the meantime, hemp farmers still have plenty of evidence to work from, thanks to Toth’s team. Chemotype-three crops. Grain- and fiber-type crops. CBD levels below 8 percent. These, it seems, are the ingredients for a federally compliant field of hemp, rain or shine.