The Process and Chemistry Behind Supercritical CO2 Extraction

Humans have a long history with extraction. Basic herbal medicine extraction practices can be traced all the way back to Ancient Egypt.

In a talk given at Analytical Cannabis’  The Science of Cannabis Extraction 2021 online symposium, Sabrina Didado, founder and CEO of Cosmic Harvest Hemp, explored the technical aspects and chemistry behind supercritical extraction for the cannabis industry.

The mechanics of CO2 extraction

Supercritical extraction relies on the particular properties of supercritical fluids. This strange state of matter is formed when a substance’s temperature and pressure is brought above its so-called “critical point” to a place where there are no clear phase boundaries. Supercritical solvents make for very efficient solvents, as they retain the diffusive properties of a gas while still having the density and solvating properties of a liquid.

Carbon dioxide (CO2) is one of the most commonly used solvents in supercritical extraction. The critical point for CO2 is found at around 31 degrees Celsius and 73 atmospheres of pressure, which is easily achievable using modern apparatus. 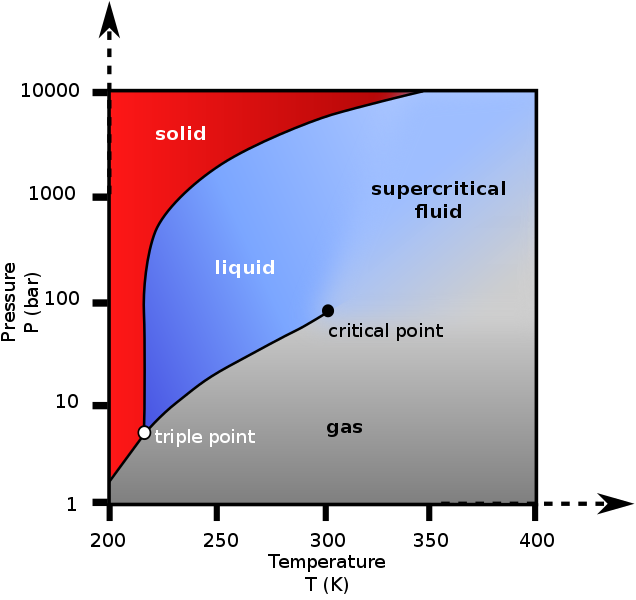 “Carbon dioxide is nonpolar, it’s non-flammable, and it is a non-toxic VOC [volatile organic compound]. And it’s because of these reasons why this is such an awesome solvent, compared to other solvents like butane or ethanol,” Didado told attendees.

From here, the mixture is passed into one (or several) separators that evaporate off the CO2 by lowering the system pressure and allowing for the cannabis extract to be collected. This CO2 gas can then be captured and recycled back through the chiller for re-use.

“Depending on the extractor, most of them can also do subcritical runs,” Didado added. “Subcritical refers to temperatures and pressures below the critical point, and in CO2 this would be a liquid phase.”

“Supercritical CO2 is good for full spectrum extraction and pulling out the heavier cannabinoids, while the subcritical process is great for isolating terpenes, flavonoids, and even isolating smaller cannabinoids.”

Supercritical CO2 extraction has been a popular technique within the cannabis industry for decades. But despite this, there are relatively little data and research focusing on how this method can be improved, said Didado.

One of the most significant pieces of work in this area, a 2016 paper published in The Journal of Supercritical Fluids, systematically studied the effects of different operating conditions and profiles on cannabinoid extraction yield and efficiency.

They found that extraction yield increased linearly with time during the initial stages of the extraction process, limited predominantly by the solubility of solute in the supercritical CO2. However, past a certain point, pressure also became a significant variable, with higher pressures producing greater masses of extract given the same CO2 consumption.

“They found that when the ethanol was applied to modify solvent polarity and enhance the extraction process, the extraction rate was improved and a lower solvent to feed ratio was required to achieve high yields,” Didado said. “The pulse regime was said to be the most recommendable operating procedure to obtain cannabinoid extracts with high yields in the shortest amount of time.”

Optimizing the extraction procedure itself is just one facet of ensuring efficient extraction. An extraction facility must also consider an array of pre- and post-extraction techniques that can help to improve the extraction and refine their final product.

For example, most facilities choose to grind the cannabis flower before extraction, to increase the surface area exposed to the solvent and to improve the packing of the biomass in the extractor. Decarboxylation to convert the raw cannabinoids into their active cannabinoid acid forms is also a common step.

“Some may not even decarb it all, it really depends on what you want to do with that extract,” she added.

Post-extraction usually consists of four steps: winterization, filtration, evaporation, and further refinement. The winterization process consists of adding ethanol to the crude cannabis oil and freezing the mixture. This allows the unwanted fats and plant chlorophyll to separate from the end product. Industrial filtration and clarification can be done in many ways, but the use of activated charcoal or silica filtration sands is a common approach.

While CO2 as a solvent readily evaporates off of the end product, ethanol does not, and so an evaporation step is required to make sure that all of this is removed from the final cannabis oil. Such evaporation tends to be done using a rotary evaporator or falling film evaporator system that can be connected directly to the distillation apparatus. Depending on the desired final product, additional refinements steps might also be required to reach an ideal consistency.

“This is why it’s always important to always have an intention for every extraction that you do. From the start you must know of the oil coming out of the extractor, where that oil will be going to,” Didado said.

“I have seen facilities extract oils without even knowing which formulation it will be used for or where it is going, and that oil will sit in the vault for months. A lot of time and a lot of money has been wasted if you do not have an intention or plan for your extraction from the start.”