The App That Can Diagnose Sick Cannabis Plants

Picture this: you decide to start out with home cultivation for the first time. You have all the equipment you could possibly need, but your plant’s leaves have started turning yellow and you have no idea why.

Now, imagine you could pull your smartphone out of your pocket, point its camera at the leaves, and have it immediately tell you whether that discoloration is a nitrogen deficiency. Or a zinc deficiency. Or whatever other problem it may be.

That’s the idea behind GrowDoc, a mobile app that uses pattern recognition algorithms to identify and diagnose nutrient deficiencies, diseases, and pest infestations in cannabis.

To learn more about the app and discuss what technology advancements like this could mean for cannabis cultivators, Analytical Cannabis recently caught up with GrowDoc’s founder and CEO, Daniel Lirette.

GrowDoc won the 2020 edition of the Startup Cup (La coupe des startups), an annual competition for young francophone businesses and entrepreneurs organized by the Association of the Youth Chambers of Commerce of Quebec (Regroupement de jeunes chambres de commerce du Québec). But the origins of GrowDoc actually go back much further.

“Back in about 2016, I had some cannabis and I found a seed in there. I was like, ‘I’m just gonna put this on the windowsill and see how that goes,’” Lirette tells Analytical Cannabis. “That’s how my growing experience started. And then obviously that was my first plant, so I had tons of issues and had no idea how to solve them. I was seeing symptoms, going online and I couldn’t figure it out.

“That first plant was almost a total loss,” he recalls. “I knew there was a big issue there with identification and trying to diagnose what’s going on and fixing your plant.”

A few years later, Lirette heard of a company that had begun offering diagnosis services for wheat and corn plant ailments using artificial intelligence. Inspired, he started to dig into whether anything similar existed for cannabis cultivators.

“I was like, ‘Wow, that’s amazing. I could have used this for me when I was growing cannabis!’” Lirette jokes.

After looking into the space, he found a couple of failed companies that had tried similar endeavors with cannabis, but nothing that he considered to be progressing. Knowing that a local college was already doing research into cannabis plant deficiencies, Lirette decided to put his tech background to use and begin building the first machine learning prototype that would eventually become the GrowDoc app.

The GrowDoc mobile app includes a plant health checker, crop disease advisory, and a disease gallery with a library of representative images for each ailment. 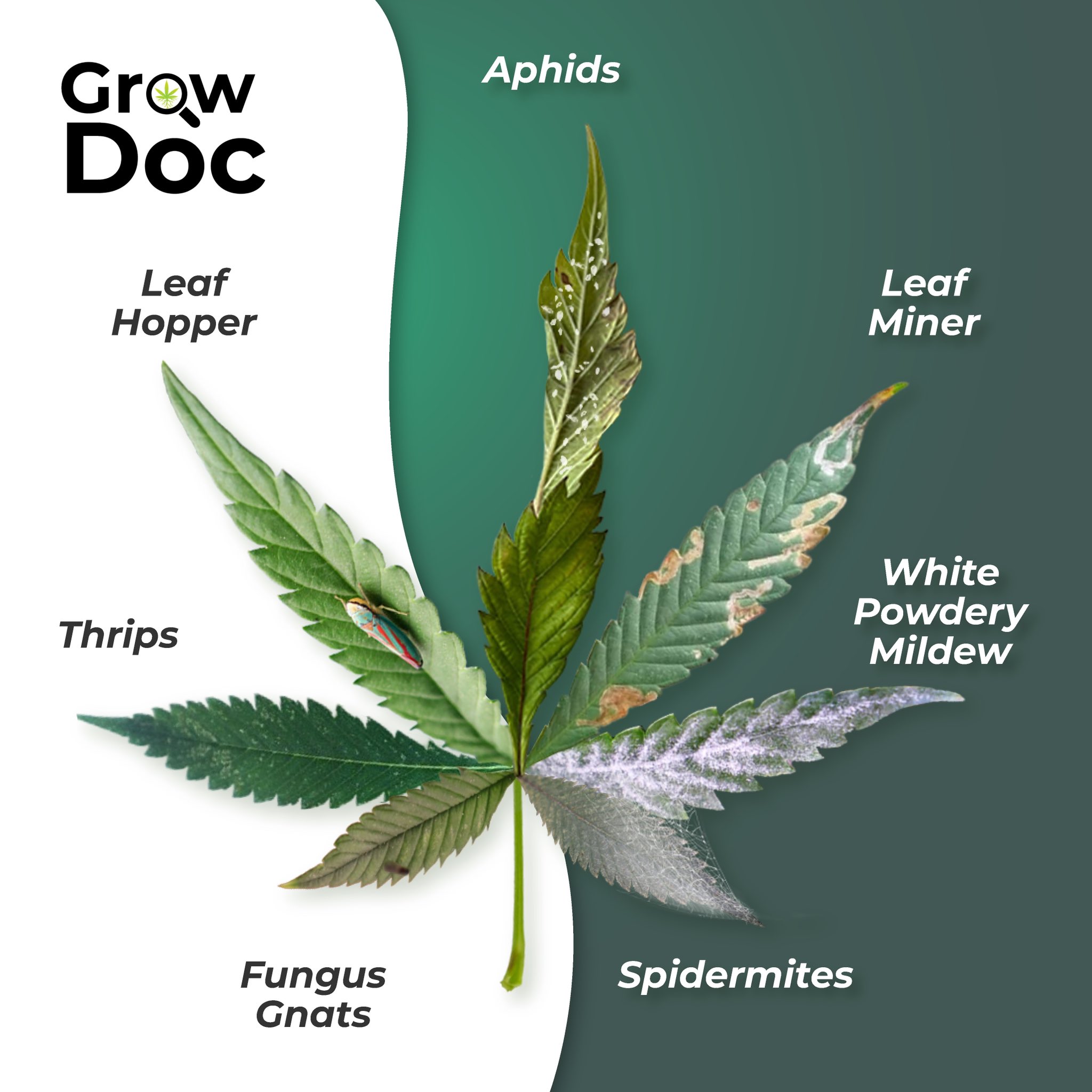 The many afflictions of a cannabis leaf. Image credit: GrowDoc.

“That’s all fed together and we’ve done eight deficiencies so far, including calcium, magnesium, sulfur, nitrogen, potassium, phosphorus, and iron. And Colorado State is doing molybdenum, manganese, and boron, and they’re repeating phosphorus and potassium as well,” Lirette says.

In order to train the pattern recognition algorithm that enables the AI plant health checker, thousands of images of a known deficiency are needed. These are the kind of data that are produced by the experiments at these universities and research institutes.

“During the first experiment, we unfortunately ran into some powdery mildew that spread,” Lirette recalls. “That was a loss, but at the same time, we had never collected powdery mildew [images]. So it was a great thing, because then we were able to collect over 4,000 pictures.”

A weed grower app to keep growers in the know

Currently, Lirette says that the app performs well when it is used to scan middle- or late-stage infections or nutrient deficiencies, but providing accurate early-stage identifications has already been labeled as a key area for further advancement.

“The [main] overlap is thrips, spider mites, and calcium, because the calcium [deficiency] will start as a dot in the early stages, which is the same as spider mites as well and kind of like thrips,” Lirette says.

While this is being worked on, GrowDoc has implemented a system where it suggests a primary diagnosis that can be overridden by the grower using the app. If the user does not think the initial diagnosis is accurate, the app will then display other possible diagnoses for the user to choose between.

“We’re leaving it to the end user to make that confirmation,” Lirette explains. “[We show] here’s what the AI said, here are videos, here are pictures, and have an infographic. So you can say, ‘Yes, the machine is right,’ or maybe, ‘No, but it might be the next one.’”

GrowDoc is designed for use by both home cultivators and licensed cannabis grow facilities, with the belief that rapid diagnosis can make things easier for cultivators of all skill levels. The large database of possible plant problems can also be used by experienced growers to confirm the app’s diagnosis, or as a general learning resource for home growers.

Building a database of cannabis plant blights and ailments that are common all over the world is the ultimate goal for the GrowDoc team, Lirette says, especially as new markets begin to legalize cultivation. However, in the short-term, the focus will be on tackling the common problems being reported by growers in the US and Canada.

“A new one that we’re seeing this year is the Japanese beetle. We’re seeing that on Facebook groups, but this is the first year that I’ve ever seen people on this scale have this bug. So that’s our next step: watching what’s going on in the industry, seeing what are the most common things that are happening, and adapting that way,” Lirette says.