Taking the Odor Out of Cannabis Cultivation: A Q&A With Byers Scientific

Complete the form below and we will email you a PDF version of "Taking the Odor Out of Cannabis Cultivation: A Q&A With Byers Scientific"

In many communities surrounding legal cannabis cultivation facilities across the US, there’s only one thing residents can smell: marijuana’s famously pungent odor. And many aren’t too happy about it.

Back in late 2018, residents of Sonoma County, north of San Francisco, became so sick of the smell from the local marijuana greenhouses they sued to ban the cannabis operations from their neighborhood. Indeed, since recreational cannabis facilities were first established nearly a decade ago in Colorado and Washington, multiple US counties and jurisdictions have had to enact marijuana smell-free zones at the behest of local residents and businesses.

It seems what can be a pleasant odor to many cannabis consumers is an unwanted pollutant to others.

So what can an emerging cannabis business do to prevent their produce becoming a public nuisance? Well, proper air filtration is a good place to start.

To find out more about the latest air filtering options for cannabis cultivators, Analytical Cannabis spoke to Marc Byers, president and founder of the odor mitigation company Byers Scientific.

Leo Bear-McGuinness (LBM): So, in a nutshell, what does Byers Scientific offer the cannabis industry? And why are those services necessary?

Marc Byers (MB): We are a full-service firm with respect to attacking the odor mitigation as well as the indoor air quality of grow environments, which is predicated on the fact that we have two world-class PhD scientists on staff. Dr William Vizuete, who is also a teaching professor at UNC Chapel Hill, has done some of the initial emissions work on the cannabis plant, trying to really understand the impacts to outdoor air quality on cannabis cultivation. Another scientist who he engaged for that study was Dr Alex Guenther, who is a globally recognized air chemist. Alex has done studies in different climates and geographies on six continents. He is a globally recognized air chemist and, with us, has pioneered this idea of leaf enclosure to develop, assess, and understand what the gas-phase emission rate of a canopy is. Those two gentlemen are members of the firm, and I’m obviously very proud to have them.

With our scientific approach and understanding of what a canopy is really doing, I think it becomes intuitive how much that informs odor mitigation strategies. Within the cannabis industry – since it is a fairly nascent industry – a lot of the efforts in odor control really are a wet thumb in the air. Certainly, much more science and innovative thinking has gone into other areas of the industry – perfecting grow lights, getting the precise spectrum, the correct humidity levels, things like this. But odor control always got short shrift. We set out to not only provide really thorough, robust, well-tested solutions on the hardware side, but also to reach those scientific conclusions with a much more analytical approach.

LBM: So when it comes to odor mitigation, what are you trying to mitigate?

MB: I think you can reasonably categorize cannabis cultivation into one of three buckets: Pure indoor/warehouse type of growing where all light and ventilation is ‘man-made,’ i.e., no sunshine, just grow lights and virtually zero natural ventilation. Then there’s greenhouse grown cultivation, which speaks for itself, and pure outdoor grown. In the case of the first two, we’re essentially trying to either neutralize and/or sequester odorous gases from the cannabis canopy depending on the emission source. The emission source in this context means, for example, either directly inside the cultivation space in a greenhouse or in the corridors and other typical common spaces in a pure indoor grow. Odor mitigation in the flower rooms of indoor grows makes no sense. Those examples would cover sequestering gases (odors) in carbon. Ambient air from ridge vents or other air exhaust points can also be treated with our patented vapor-phase approach, which relies on neutralization (molecular change) of the odors as opposed to trapping (sequestering) them in carbon.

The gasses themselves that we’re referring to are a mix of terpenes and sulfurs that emit from the canopy throughout the day as numerous conditions change, such as temperature, humidity, time of day, black-out conditions etc. In the case of greenhouses, ultimately, we’d prefer to scrub the interior air of the cultivation space and sequester those emissions in carbon. We can also then employ either our vapor-phase systems to deal with fugitive odors that may escape from the ridge vents or our atomization systems for side-venting fans. In pure indoor facilities, we’re relying nearly 100 percent on carbon scrubbing.

LBM: So how does Byers Scientific address this odor challenge?

MB: Byers Scientific is made up of three divisions: mitigation technologies, which is hardware – all of our equipment that we design and build – emissions analysis, that’s doctors and then intelligence systems, and a third division focused on tech; everything we build has its own cloud-based website.

With these three divisions, if Byers’ emissions analysis can come in first and do a leaf enclosure study, then that is going to help us understand with a pretty high degree of accuracy what the gas-phase emission rate of the canopy is, which is effectively how many times an hour does the canopy completely off gas. Because it’s that off-gassing that’s setting the stage for odors. And the gas phase emission rate is a highly dynamic thing; many factors are affecting this throughout a 24-hour cycle: the humidity level, the temperature, etc. As you can imagine, it’s a plant, it’s a living, breathing plant. So of course these measurements aren’t going to be necessarily static or linear. But nonetheless, we can get pretty close to understanding what that gas phase emission rate is. 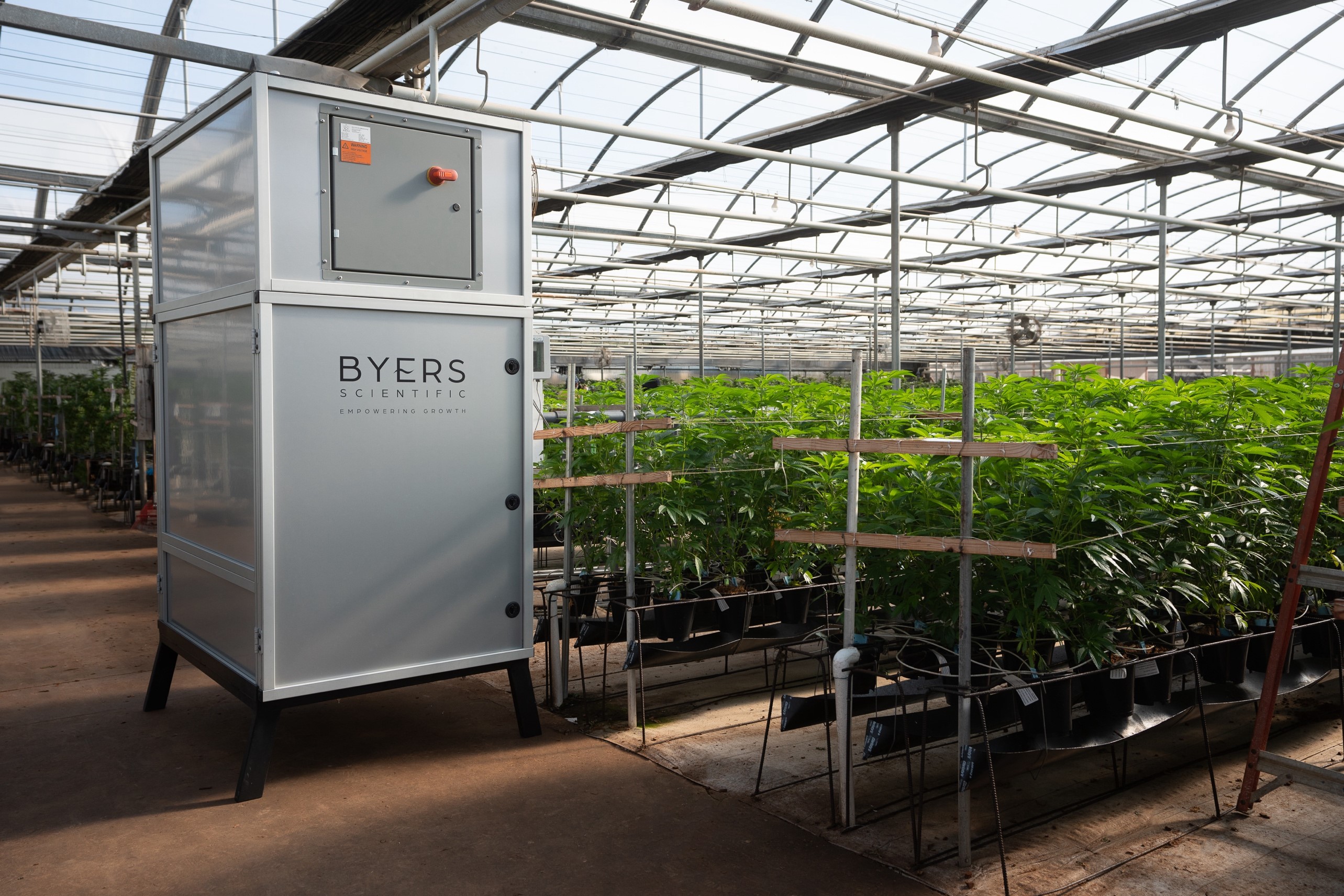 The idea of a mass-balance calculator is not new to the field of biology. But the Cannabis Emissions Profiler (CEP) that we developed is unique in that it is a mass-balance calculator built specifically for a cannabis cultivation. So let’s say this CEP spits out an answer of three times an hour, meaning three air exchanges an hour. That would imply that we need to exchange air through our molecular filtration systems, AKA, carbon scrubbers, at least three times an hour to keep up with the canopy's emission rate. If you do a volumetric calculation of a space, then you’re going to come out with a cubic volume. Once you know what that volume is, then you know how many times an hour a particular piece of equipment or how big that piece of equipment is going to need to be in order to achieve that exchange rate. And when I say exchanging the air, what I mean is we are drawing all of the air through the carbon filters and put it right back into the space and just continue to do that recirculation, so that every one of these carbon scrubbers is sequestering these gases in carbon and returning cleaner air back into the growth space. That CEP calculation then should drive how big or how many scrubbers you need, reaching a point of optimization. You could have one gigantic scrubber that does the job, or you could have 50 smaller ones that could also do the job.

There’s an optimization opportunity in there that considers other factors that would be important, such as the size of the actual scrubber and the shadow that it potentially casts on the plant. That scientific approach of having a pretty good understanding of how many exchanges are going to be necessary to properly scrub the air then drives the design of those scrubbers.

LBM: And with odor control now becoming more of a staple for cannabis cultivation facilities, how do you think regulation will change over the coming years?

MB: Well, that can go in a lot of different directions. A message that we try and get out is that we can interact with the cultivation customer, but also jurisdictions, whether it’s county or state level, that are just starting to open their doors to cannabis cultivation. [It’s about] trying to get in with those regulators and urge them to get certain standards in place. Because often [when] the state legalizes cannabis, it’s a profit-seeking endeavor, and as money flows, things are going to start to move quickly. Then the next thing you know, that particular jurisdiction is now behind the curve in setting up its rules and regulations. Of course, a lot of work goes in ahead of time, but, on the odor control part, these places are always focused on tax revenue, business licenses and things like this. I think it’s partly a case of they just don’t know what they don’t know. Although, many municipalities should have learned by now, having a couple years under their belt, that this is something they need to consider, putting rules in early on odor control. We really do try and get to as many jurisdictions as we can to help them understand what are the appropriate rules and regulations to put in place.

Marc Byers, founder and president of Byers Scientific, was speaking to Leo Bear-McGuinness. Questions and responses have been edited for clarity.

Some responses were amended on December 2, 2021.