For the purposes of this article, the definition of a psychedelic drug will be taken to mean any drug capable of provoking a psychedelic experience by its action at the 5-HT2a receptor. The classical psychedelics are LSD (lysergic acid diethylamide), mescaline, psilocybin and DMT (dimethyltryptamine). While LSD has always been a semi-synthetic compound, the others have historically been extracted from plants, although are now more commonly being synthesized for human use. We will look at the quality aspects of the production of psychedelics, both when they are being used as plant-derived compounds, and when they are being synthesized or produced biologically.

A brief history of classical psychedelics

Over the last 30 years or so there has been a re-awakening of interest in the therapeutic potential of psychedelic agents as medicines. Mescaline, produced naturally in the peyote and other cacti, and used in religious ceremonies for millennia, was synthesized in 1918. Psilocybin, found naturally in a range of mushrooms and also used in religious/spiritual ceremonies, was chemically identified and then synthesized in 1950. LSD was first synthesized by Albert Hofmann at Sandoz in Basel in 1938, during a medicinal chemistry campaign to develop synthetic ergot compounds. DMT was first synthesized in 1931, but its psychedelic properties were not discovered until 1956.

In the 1950s and 1960s, a considerable number of clinical investigations, mostly using LSD, were described, and LSD, in particular, was seen as a potential treatment for ‘psychoneuroses’ such as anxiety and obsessive-compulsive disorder, as well as for alcoholism and for chronic pain. Probably because of the similarity of the psilocybin experience to that of LSD, psilocybin and DMT have become development candidates in the same therapeutic areas as LSD. For reasons which are unclear (at least to this author), the current vogue for psychedelics-based therapies does not seem to extend to mescaline.

LSD and Its Structural Derivatives 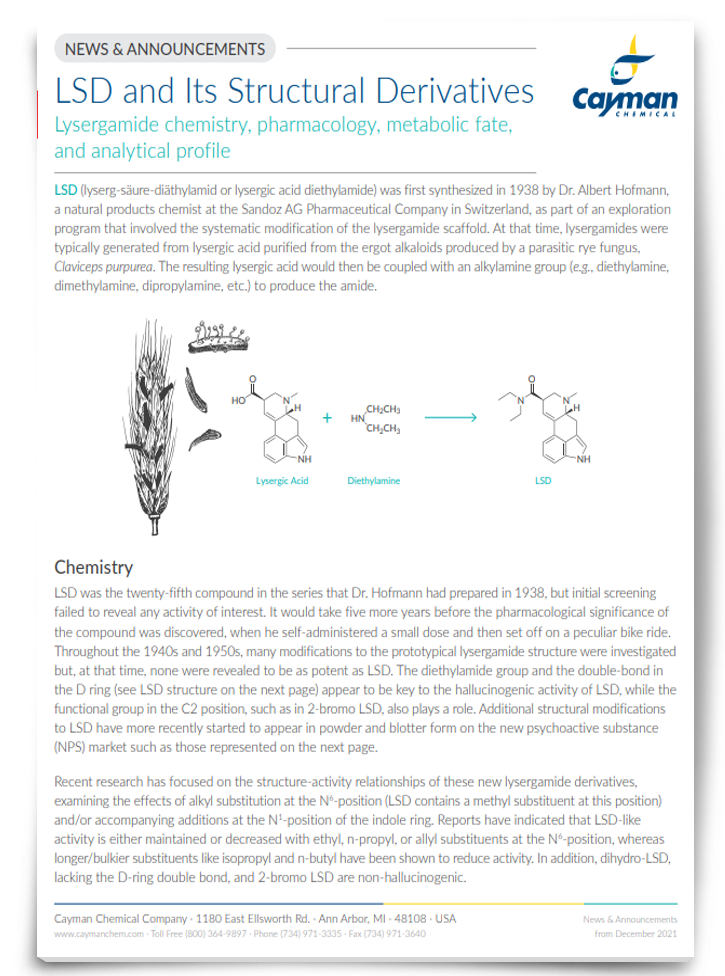 Cayman offers authentic lysergamide analytical standards and research compounds for the identification of lysergamide NPS and to aid in research and discovery of these compounds for therapeutic use. With renewed interest in the potential of psychedelic drugs for the treatment of mental health disorders international research interest in LSD is growing rapidly. Download this article to find out more about the human metabolism of LSD and the analytical profile of LSD and related analogs.

View Article
Precedents for the rescheduling of Schedule 1 drugs

The classical psychedelics are all classified in Schedule 1 of the Controlled Substances Act in the United States, meaning that they are considered to have a high potential for abuse, and no recognized medical use. The only ways to re-schedule a compound out of Schedule 1, therefore, are to show either that it does not have a high potential for abuse, or that it has a recognized medical use. A well-accepted criterion for the latter is to gain FDA approval for the compound as a medicine. The only precedents for such a re-scheduling process are those of delta-9-tetrahydrocannabinol and cannabidiol (components of cannabis and available as the prescription medicines Marinol, Sativex, and Epidiolex) and gamma-hydroxybutyrate (available in the form of the sodium salt as Xyrem). In each case, the basis for approval can be found online, and the quality requirements identified within the FDA review process.

Companies aiming to produce medicines from plants have an expectation that the FDA will extend some concessions to them in the way of quality assessment. After all, humans have been exposed to the ‘traditional’ psychedelics such as psilocybin, DMT (as part of the traditional psychedelic brew ayahuasca), and mescaline for many years. Equally, despite its synthetic origin, the fact is that thousands of humans have been exposed to LSD. So, goes the argument, we do not need to do all the expensive, time-consuming pre-clinical evaluation that would be required for a new molecule.

The US and Japan joined European regulatory agencies at a WHO Conference of Drug Regulatory Authorities in Paris in 1989, and in 1990 the International Council on Harmonisation (ICH) was formed and the terms of reference agreed.

These terms of reference and the associated series of guidance documents provide a framework against which all National Competent Authorities assess the adequacy of the data provided by drug manufacturers who are seeking a product license for their compound. For the assessment of the quality aspects of the new drug application, the ‘Q’ series of guidelines apply.

These guidelines and requirements apply regardless of the origin of the material from which the drug product is made, or the indication being sought for the drug product. Having said that, there is always room in the interpretation of the guidelines for a degree of flexibility, provided that adequate justification exists for the use of such flexibility.

Is there a different system for psychedelics?

To date, no classical psychedelic agents have been approved for use as a medicine, so while it is not possible to be categorical, we should assume that the same requirements will apply as would apply in the case of any new small molecule. The author’s own experience with the quality assessment by FDA (and EMA) of a plant-derived cannabinoid is that the manufacturer (GW Pharmaceuticals) was not permitted to ‘cut any corners’ in the data requirements for the assessment of the quality of the material, at any stage of manufacture. The fact that all psychedelics are in Schedule 1 of the Controlled Substances Act adds complexity, since the re-scheduling process involves an examination of the manufacturing process, with the aim of reducing the chances that the compound can be easily made in a kitchen or garage, and thus reducing the chance of diversion.

I asked Ash Ramzan, principal consultant at Woodley Bioreg, whether manufacturers of psychedelics might expect concessions from the chemistry reviewers at competent authorities. He replied, “Unless the regulatory frameworks are updated to reflect the development and commercialization of this class of drugs, the concession already available to all other medicines will apply equally. Given the nature and potential for recreational use and abuse of this class of drugs, it would seem unlikely that any competent authority would seek to reduce the regulatory burden for their review and approval.”

It used to be asserted that a small molecule would be manufactured by some form of chemical synthesis, with well-defined starting materials and intermediate stages at which quality could be determined. Conventionally, these might be called ‘key intermediates’. Conversely, a biologic agent would be produced by a process that involves a biological source. This could involve using a cell-based substrate – for example, the insertion of a gene into a single-cell organism such as E. coli or yeast, with the resulting fermentation leading to the production of a large molecule by the system, followed by a purification process.

The control of these two fundamentally different approaches is inevitably different. For example, in the biologic process, there are no key intermediates. Hence in-process controls attract a lot of interest, to the extent that the product is controlled as much by the integrity and reproducibility of the process, whereas small molecules produced by the synthetic route are defined more or less exclusively by their chemistry.

This apparent clear distinction between synthetic manufacturing processes for small molecules and biologic manufacturing processes for large ones is becoming blurred as patents are being filed, and biotechnology companies set up to manufacture small molecules, such as psilocybin and various cannabinoids, using biological methods, involving genetic manipulation of cell systems, and fermentation. Ash Ramzan commented, “Given the natural, intrinsic variability of biological manufacturing systems, the main challenges are always around product and process characterization, process validation, and lot-to-lot consistency. These are no different to any other biological medicine."

A regulatory framework for plant extracts

The US FDA initially developed draft botanical drug guidelines to aid those applicants who wished to develop plant extracts as prescription products. These draft guidelines are now final, and while they accept that chemistry manufacturing and controls (CMC) requirements for entry into Phase 1 or 2 studies may be relaxed in the situation where the molecules in the product have been used by humans previously, the same guidelines are clear that this concession does not apply to Phase 3 and beyond. In this sense, the quality requirements for a botanical drug are a sort of hybrid of those applied to biologics and to small molecules – it is essential to fully characterize the compounds produced at each stage of extraction and purification, but it is also critical to describe the nature of the plant, its genetics and or horticultural type and its growth conditions (light, heat, humidity, food and water sources and so on). Of the hundreds of plant extracts that have successfully applied for an investigational new drug application (IND), very few have gone on to success at the new drug application (NDA) stage.

But no matter – the road map to understanding the quality requirements for new psychedelic compounds is called the Q series of ICH guidance documents 1, and any manufacturer of a psychedelic who wishes to gain a product license for their compound will need to make sure that they pay due attention!