Whilst cannabis has been grown for many years, recent changes in legislation are now moving it from the unregulated black market into the mainstream market. As such, regulation is necessary to protect the end user from harm. Like any consumer product, extensive research is needed to identify the best practices for cultivating, harvesting and processing the crop efficiently and safely.

In any crop, plant pathogens can cause disease and reduce yields, as well as potentially present a risk to consumers. Identifying the pathogens is vital in finding the best way to prevent their presence and spread. The use of pesticides is restricted by many regulatory bodies responsible for state-level cannabis programs.  This is in line with the research and regulations in place for other mass grown crops. However, research specifically on cannabis cultivation is lacking, due to the history of cannabis prohibition which means cultivators and processors have much less hard evidence to base their practices on. The increasing legality of cannabis means this research needs to happen quickly to avoid any issues such as mass crop death or pathogens affecting consumers.

For this reason, a team at Fraser University in Canada examined pathogens affecting field-grown cannabis and published their findings in the Canadian Journal of Plant Pathology. The field in question was a commercial grow in northern California in the summer of 2017 when the area was undergoing a period of extreme hot weather. Plants were found yellowing and wilting when this would not typically have been expected given the location and time of year.

The problem with the crop

The typical cycle of field-grown cannabis begins with germination in late spring and harvest from late summer to early autumn. Cannabis plants grow optimally within 35° of the equator, in environments similar to central and southern Asia - the plants native habitat. The crop in the field in northern California was significantly further north than that. This may have affected the growth of the plants but it is worth noting that northern California is an incredibly well-established area for outdoor cannabis cultivation and offers an environment suitable for strong growth and yield.

The plants were examined to determine what potential pathogens were present, and which of those presented a risk to the plants. The plants had completely collapsed between July and September when temperatures exceeded 35°C. The researchers looked into the extent of the decay within the plants, as well as how much of the stem tissue was affected. They also tested the pathogenicity (ability to cause disease) of the bacterial species found in the sample.

Based on the observed affected areas, the researchers decided to focus on the root and crown (where the plant breaks through the soil). The difference between healthy cannabis plants and the diseased plants are shown in Figure 1. 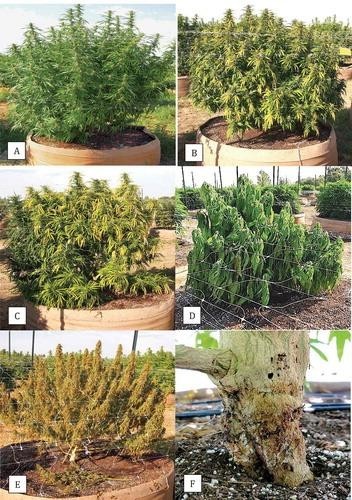 In the picture, A is a healthy cannabis plant at about 16 weeks and in full flower. B, C, and D show the gradual death of the plant, with the wilting and yellowing obvious. The visible wilting in image D was due to the effect of the rot and the severe hot weather, showing how profoundly the heat affected the plant. E shows the final death of the diseased plant. F shows the effect of the rot at the crown itself, with the rot extended 15cm upwards. This would not be visible from further away, especially with the way the leaves hide the stem in the other images. This shows how important being able to prevent these pathogens is to the health of the plants.

The researchers took samples from stem cuttings from the production fields. In total, twenty samples were taken from six symptomatic plants – ten samples of bark tissue from the crown, and ten taken from 10-15cm above the crown. These samples were cut, treated and incubated, and cultures were taken for identification. The cultures were identified by PCR (polymerase chain reaction), followed by DNA sequencing.

Pathogenicity was tested for each species using rooted cuttings, which were inoculated with the strains at around four weeks. The plants were compared to a control that received sterile water instead of a solution containing the pathogens. After five weeks the plants were examined and depotted to observe the level of root browning. There was also a stem cuttings test for pathogenicity, in which mature plants (12-14 weeks) had stems harvested and had 6cm of the stem removed. The stems were inoculated and the browning observed was rated from zero to four.

Only F. equiseti was found to be non-pathogenic in this specific case. This bacteria has been found to be pathogenic in other plants, such as cabbages. Due to this, it should not be discounted as the lack of pathogenicity may have only been due to the low frequency of the species.

Two of the pathogens – specifically F. solani and P. aphanidermatum caused plant death within six to ten weeks of inoculation. This demonstrates the necessity of being able to identify any pathogens as early as possible, as there may not be enough time to treat the plant before it dies, if not identified shortly after infection. This is even more important when you consider that these pathogens affect the root and crown – areas of the plant that are not visible to the people growing the plant until it is too late.

Interestingly, F. brachygibbosum was identical to a pathogen reported in almond stems which are also grown in northern California. This shows not only that these pathogens are most likely not uniquely adapted to cannabis, but that other pathogens not identified in this particular case could affect cannabis plants as well. This could be an avenue for future research – bringing in pathogens found in crops such as almond stems to assess their pathogenicity.

The effect of the research

The findings highlight a potential issue for field grown cannabis, as a complex of pathogens can result in wilting, and could spread and lead to the collapse of the plants. As with any crop, methods must be found to prevent this, without excessive chemical intervention. Further research may need to be carried out to identify these pathogens earlier, before they begin damaging the crops, and how to isolate affected plants and prevent the spread of disease.

The extreme weather conditions should be considered when looking at this study, as the heat may have allowed the pathogens to thrive in a way they may not under typical conditions. There is no evidence of the effects being the same under the normal weather conditions, and as a result, this study could be a “worst case scenario” situation instead of the expected outcome.