Driven by the introduction and evolution of cannabis contaminant testing, and regulations in many different states, companies in the cannabis testing industry are constantly innovating and creating new methods and applications for use in testing laboratories.

To learn more about some of the major trends and potential future themes in the cannabis testing industry, we spoke to Anthony Macherone, Senior Scientist with the analytical and diagnostic company Agilent Technologies and Visiting Professor at the Johns Hopkins School of Medicine.

Jack Rudd (JR): Can you tell us about the work that Agilent has been doing in the cannabis industry over the past few years?

Anthony Macherone (AM): We are active in the cannabis markets in the US and Canada, Mexico and Latin America, and also a number of EU countries where the medicinal and/or recreational use of marijuana has been legalized in that jurisdiction. We’ve been in discussions with leaders in those markets trying to assist in whatever they are doing - whether they are growers or work further down the line in laboratories with medicinal or recreational cannabis. It spans a lot of areas.

There is still a forensic component to cannabis and post-consumption inebriation testing will always be vital. With that, there also comes workplace drug testing which Agilent has supported for many, many years. We also have a couple of projects focusing on specific cannabinoid pharmaceutical research. Our primary focus over this past couple of years has been on safety and quality testing in the recreational and medicinal cannabis market, which has really exploded in North America especially.

We've been working with everyone from brand-new startup labs to venture capital-type places, where they often don't have much experience with analytical chemistry or testing, all the way through to very large, well-established agricultural and environmental laboratories that are expanding their business model into the cannabis testing world.

JR: Have you come across any challenges when you are working with these kinds of labs?

AM: The regulatory environments are very unique to each state in the US and  Canada, so that can provide a challenge depending on where the lab is based. Each state has its own target lists of chemicals and defined actions levels. There are some common requirements though. Potency testing is always required, and pesticide testing is almost always required. Microbial screening is also very important. When it comes to heavy metals, residual solvents, and terpene analysis there’s a lot more variation.

We also see quite a large variation in sample preparation techniques prior to analytical testing. Sometimes the sample preparation method can greatly affect the results, so it needs to be very precise, especially in things like pesticide testing.

JR: Does Agilent have any core technologies or recommendations for sample prep in pesticide testing?

AM: Yes, often the key to accurate analysis is sample prep. We worked in conjunction with Pacific Agricultural Laboratory, and we have some publications that describe rigorous sample prep routines. Working with Pacific Ag, we developed a method that went beyond what is required in Oregon, the state in which they are based, and quantitates 215 pesticides in total to give them a much broader picture. In our most recent publication, we describe a sample prep method for minimizing contamination that includes solid phase extraction (SPE) which produces a clean extract that can then be run on a number of different analytical instruments, such as a triple quad liquid chromatography-tandem mass chromatography (LC-MS) instrument, or an equivalent gas chromatography method.

One of the main focuses at two of our Agilent Centers of Excellence in Montreal and Santa Clara is to develop a simple singular workflow which would cover pesticide testing regulations for the cannabis industries in Canada, California, and all of the other U.S. state regulations. This year we've spent a lot of time developing a workflow, including sample prep, acquisition, data analysis, and reporting, that we can essentially hand to our customers as a comprehensive guide. 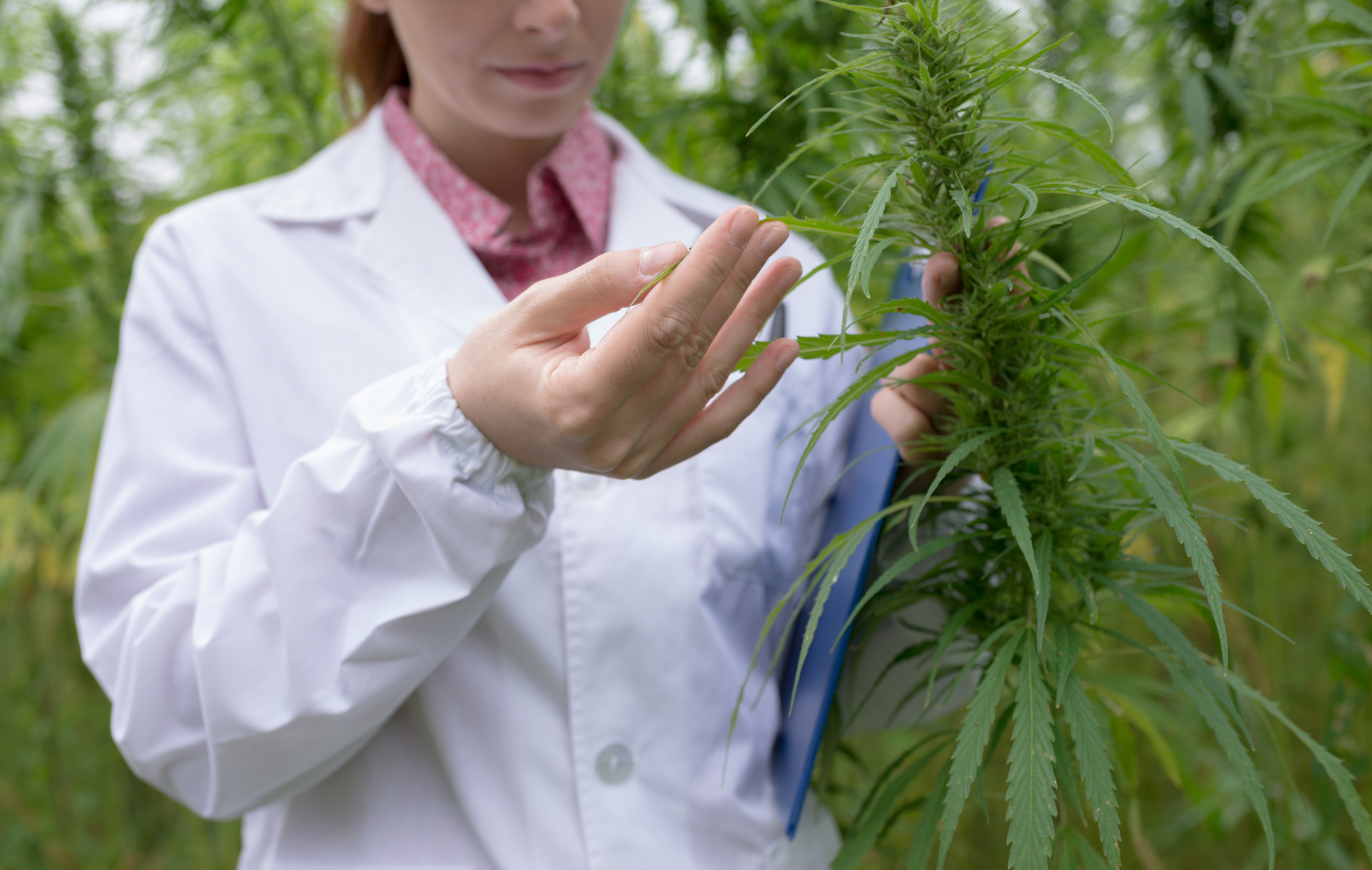 We have very recently focused specifically on pesticide analysis for the Canadian target list of 95 compounds with detection requirements around 10 parts-per-billion (ppb) and will be publishing a new procedure that includes sample prep and analysis on both LC-MS/MS and GC-MS/MS systems in the very near future. We will also be publishing a California focused methodology around the same time-frame.

We want to give people the flexibility to use the instruments that they have in their lab and exploit the pros and cons of electrospray versus electron ionization. To this end, we developed one sample prep method that can be used on either platform for pesticide testing and we’re constantly improving these workflow recommendations.

JR: There has been a lot of discussion around heavy metals testing in the cannabis testing industry lately. Is this something you have your eye on?

AM: Heavy metal tests will be required in California starting January 1, 2019, so yes, there's a lot of activity around that. We are seeing laboratories on the West Coast outfitting their labs in preparation for what's coming with the metal testing requirements including major purchases in equipment for that purpose.

For heavy metal testing, it is quite easy to bring in equipment from other fields, such as food testing, to do the basic analysis that’s going to be required. At Agilent we not only test and quantitate for the basic metals that are regulated; we also aim to provide a much larger panel. Using inductively coupled plasma mass spectrometry (ICP-MS) technology you can monitor up to 25 different types of potential metal contaminants in a single run, significantly more than the 4-5 most common metal contaminants that are usually tested for. By choosing to study this larger panel, laboratories and their customers can get a much better picture of potential metal contamination in the plant material, with no extra time delay or additional cost.

You never know what you might find in some of these plants, and I think if you can use a broader approach to testing it may lead to the products of these laboratories ultimately becoming safer for the consumers. Personally, I think that’s the direction we’re moving towards - companies and regulators wanting to get a better and broader image of what’s in these samples.

JR: We’ve also seen a lot of debate on what the best microbiological testing method for cannabis testing is. What’s Agilent’s approach to this kind of testing?

AM: We use a product called the AriaMx, which is a real-time qPCR instrument. In this case, we have partnered with Medicinal Genomics who make the kits that include the primers for E. coli, Aspergillus, and other potential microbial contaminants. In terms of selectivity, we feel like that’s the best approach. With plating methods, there is always the possibility for misidentification when looking at just morphology, so despite the popularity of plating, we feel like PCR methods are the best approach.

JR: Is there anything in particular that you and the team at Agilent will be keeping an eye on over the coming year?

AM: We're always keeping an eye on what that next gap is going to be. For example, will time-of-flight mass spectrometry (TOF-MS) start to play a role in this market? Right now it looks like single quadrupole and triple quadrupole mass spectrometers are doing the job, but as the market grows and the science grows with it and the demand for more comprehensive screening methods increases, it could be the method of the future.

We recently did a short presentation at the Cannabis Science Conference about the prospect of using TOF-MS to do product comparisons or cultivar comparisons on cannabis matter. In this case, we looked at six different cannabidiol (CBD) supplements for pets which are receiving a lot of interest from pet owners who claim that CBD can provide positive therapeutic effects for their animals. The data from this analysis can be fed into bioinformatics tools and, from that, there is the potential for a powerful analytical tool that can look at the similarities and the differences between different products or strains.

TOF-MS could also potentially be used in pesticide analysis, but they do tend to be present in very low concentrations. Certainly, there are ways you can increase sensitivity through the front end, so if we could screen for pesticides in a non-targeted way, we could get more comprehensive information that may be beneficial. There’s a lot of work to be done to make this a reality because the concentration of the pesticides is so low.  What I think we should be doing with time-of-flight, is basically screening every sample and then doing subsets of the quantitative analysis.

Another example would be cannabinoid research with respect to medicine and drug development applications. We’re already involved in a project where our client aspires to use cannabidiol analogs for the treatment of specific diseases. It's traditional drug development work to improve the solubility and permeability of CBD because it's very lipophilic. It’s certainly an exciting frontier.