A group of researchers have discovered and characterized two naturally occurring cannabinoids, one of which is thought to be 33 times more potent than tetrahydrocannabinol (THC).

Recently published in Scientific Reports, the study speculates that this compound may explain some of the variability in effects between different strains of cannabis.

The pharmacological activity of THC on the human body is thought to be linked to its binding affinity for the CB1 receptor, which is present in the body’s endocannabinoid system.

Using an in vitro binding assay, the researchers sought to measure whether one of the newly discovered compounds, named Δ9- tetrahydrocannabiphorol (THCP), might also have a strong affinity for the CB1 receptor, as THC does.

They found that THCP has a binding affinity 33 times higher than the value reported for THC in literature. What makes the molecule bind so strongly? Well, the researchers believe it might have something to do with THCP’s longer alkyl chain.

Naturally occurring cannabinoids are synthesized through the reaction of olivetolic acid and geranyl diphosphate. Due of the structure of these precursors, most cannabinoids will contain an alkyl (containing only carbon and hydrogen) side chain, which is five carbon atoms long.

But the existence of other cannabinoids with alkyl side chains of a different length has recently been uncovered. These cannabino-varinoids (three-carbon-long alkyl chain) and cannabino-orcinoids (a single -CH3 group) are much rarer than cannabinoids containing a five-membered alkyl chain, but have been confirmed to be naturally synthesized in the cannabis plant.

The Italian research group claim that the two new cannabinoids each contain a seven-membered alkyl side chain. 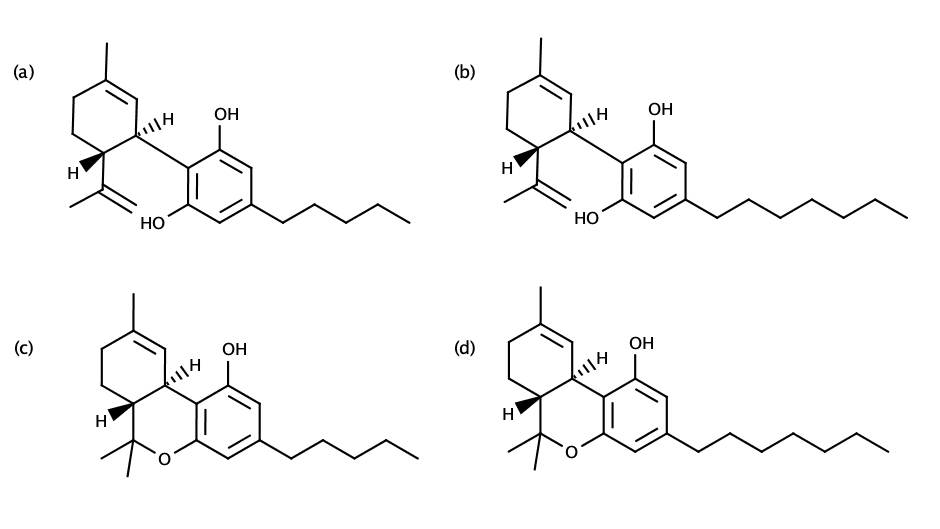 “To the best of our knowledge, a phytocannabinoid with a linear alkyl side chain containing more than five carbon atoms has never been reported as naturally occurring,” the authors wrote.

“However, our research group [has] disclosed for the first time the presence of seven-term homologs of CBD and Δ9-THC in a medicinal cannabis variety.”

These longer alkyl chains may help THCP extend into a side channel within the structure of the CB1 receptor, maximizing the potential interaction between the molecule and the receptor.

The discovery of THCP and CBDP

To uncover THCP and the other new compound, named cannabidiphorol (CBDP), the researchers worked with sample of the Italian low-THC medical cannabis variety FM2, provided by the Military Chemical Pharmaceutical Institute in Florence. Using an advanced form of ultra-high performance liquid chromatography coupled to high resolution mass spectrometry apparatus, it was possible to separate out and identify the cannabinoids from an FM2 cannabis extract.

THCP and CBDP, once isolated, were characterized fully using nuclear magnetic resonance (NMR) spectroscopy, circular dichroism (CD), and ultraviolet (UV) absorption techniques. Artificially synthesized amounts of THCP and CBDP were also created in the group’s laboratory, which analyzed and used to confirm the identity of their naturally occurring equivalents.

Why are these compounds important?

Further in vitro tests carried out by the Italian researchers in mice found that THCP decreased locomotor activity, induced catalepsy, and produced analgesia – in a similar fashion as THC and other CB1 receptor agonists might. THCP was also able to induce these effects at significantly lower doses than THC, backing up the characterization of THCP as a potent, pharmacologically active cannabinoid.

The team is also conducting ongoing studies into determining the potential pharmacological activity of CBDP, to evaluate whether it might also exhibit the same anti-inflammatory, anti-oxidant, and anti-epileptic properties as CBD.

While THCP and CBDP were only found to exist in relatively small quantities in the cannabis strain studied, the researchers note that this could be different in other cannabis strains.

“It is reasonable to suppose that other cannabis varieties may contain even higher percentages of Δ9-THCP,” they wrote.

“It is also important to point out that there exists an astonishing variability of subject response to a cannabis-based therapy even with an equal Δ9-THC dose. It is therefore possible that the psychotropic effects are due to other extremely active phytocannabinoids such as Δ9-THCP.”

“In our opinion,” they concluded, “this compound should be included in the list of the main phytocannabinoids to be determined for a correct evaluation of the pharmacological effect of the cannabis extracts administered to patients.”

In many parts of the world, the scientific study of cannabis is a complicated endeavor, stifled by laws that greatly restrict scientific access to cannabis as a result of its status as a controlled substance. Long delays created by license paperwork and poor quality cannabis sources have frustrated research efforts over recent years. The discovery of these potent new cannabinoids serves to demonstrate just how much there still is to be understood about cannabis, and the importance of the work being done by those on the frontier of the field.