How Long Do Edibles Last? 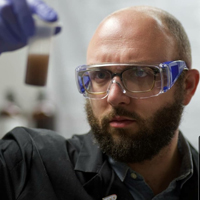 Learn about our fact checking process

Complete the form below and we will email you a PDF version of "How Long Do Edibles Last?"

The edible high can peak 2-3 hours after consumption and the effects can last 7-12 hours in total.

According to the existing research, the effects of marijuana edibles can start to kick in anywhere from 30 minutes to an hour following ingestion. The peak high can then occur two-to-three hours after consumption, while muted effects can often persist for five hours or more after that.

If only small amounts are taken, this ‘come down’ could be relatively quick and normality may resume as soon as six hours after the edibles are eaten. But if a dose is particularly high (20 milligrams and above), the effects can last much longer.

Timeline of an edible high:

But, of course, it’s always going to be more complicated than that. The effect of edibles will differ depending on how much was consumed, the THC potency, the contents of a person’s stomach, and their digestive health.

So to understand the edible high in more detail, it’s important to know how digesting cannabis differs from smoking it, how fats change the potency of cannabinoids, and which digestive organs they affect. And before that, it’s good to ask the obvious...

Cannabis edibles can be different products to different people. To the investor, they’re a growing market predicted to hit $4.1 billion by 2022. For the health-conscious connoisseur, they’re an alternative to traditional combustion methods. And for the careless customer, they’re the cause of a crazed night they’d rather forget.

But at their basic level, edibles can be any cookie, brownie, chocolate bar, gummy bear or other treat laced with cannabis chemicals like THC and CBD. And because these confections are digested rather than inhaled, they can affect the body in far more potent ways.

In recent years, this stronger, longer-lasting effect has led to several edible-horror stories. Certain consumers have jumped off buildings and even murdered family members. Fortunately for most novice customers, the outcome of over-consumption is likely just a night of paranoid regret. Unpleasant, yes, but relatively risk-free.

Nevertheless, these dangers have sparked stricter regulations in some legal areas. Canadian authorities only legalized the products this October on the condition of a 10-milligram THC cap, which they hope will prevent over-consumption incidences.

So why are these safeguards really necessary? What it is that can make digesting cannabis a more terrifying experience than smoking it?

“Depending on whether you're smoking [cannabis] or taking an edible or an oral liquid, they'll go through a different pathway,” says Tim Garrett, an assistant professor at the University of Florida College of Medicine. “So if you're ingesting it, it's going to go through your digestive system, be metabolized, and [absorbed] in a different manner than it would be through smoking, which would be distributed through the lung system and have a more rapid effect.”

So digestion is key to edibles' effect. But it does depend what type of food is being digested.

While it may seem like brownies and chocolates dominate the edibles market because cannabis consumers are chocoholics (and some certainly are), there’s actually some solid science behind this sugary selectivity.

“I've studied lipids and fats for the last 15 years,” Garrett tells Analytical Cannabis, “and THC and CBD are highly lipophilic, so I would assume they perform better when they're associated with other lipid formulations.”

As it turns out, fats are ideal vessels to bind with and carry THC and other cannabinoids across the many cell barriers and membranes that span the stomach and intestine. So don’t expect to find a cannabis salad on the market any time soon.

“[The fats] allow you to cross through the epithelial layer of the intestinal wall into the bloodstream using a liquid transfer media,” Garrett adds. “That's part of reason why we have oils.”

This sticky relationship between fats and cannabinoids is partly why an edible-high can feel so much more potent than the effect of smoking cannabis. But it’s not the only reason.

Rather than the stomach or the lungs, it appears that the key organ that creates that edible-kick is actually the liver. It’s here that marijuana’s famously intoxicating THC is slightly modified to become 11-hydroxy-THC. Though far less is known about 11-hydroxy-THC, research suggests that it can cross the blood-brain barrier even faster than THC and create a more dramatic impact.

But while 11-hydroxy-THC may not be as present in inhaled cannabis fumes, new research indicates that the medium of smoking shouldn’t be disregarded as ‘weaker’ than digestion just yet.

“Depending on the studies we look at, inhalation has the highest bio-accessibility, north of 20-to-25 percent,” says Michael Rogers, an associate professor at the University of Guelph. “But when you start talking about edibles – a chocolate bar, cookie or an oil, for example - you're talking single digit bio-accessibility, meaning 90 percent of that never exerts its biological effects. It's either degraded in first pass metabolism or it's just excreted with the feces.”

So, yes, digesting marijuana can make the cannabis chemicals more potent, but the process isn’t very efficient. Plenty of cannabinoids are left unmetabolized and excreted – something Rogers is working to rectify by binding even more cannabinoids to fats.

“Instead of going through the haptic portal vein to the liver, we can get [cannabinoids] to go in with the oil through the lymphatic system, which then bypasses first pass metabolism,” he told Analytical Cannabis in March. “So we look at technologies that are stable and can have an exaggerated effect with the same concentration.”

How long do edibles take to kick in?

Famously – or infamously depending on how much you’ve eaten – edibles take a while to kick in. Certain studies have narrowed down the average onset time to be between 30 and 60 minutes. But many retailers and producers caution consumers to wait at least two hours to feel the full effects of the product before deciding whether to eat more.

“One of the issues is when you ingest it, you're going to have a delayed effect versus when you're smoking it,” Garrett says. “So you have this differential understanding of how and when your body's going to have a change.”

But these standard one-to-two hour waiting times aren’t always exact predictions for each person. As Garrett explains, the contents of the stomach and a person’s digestive health can make all the difference.

“Our digestive systems aren't the same,” he says.

“Some people have a stomach that may not empty as fast, so your body may take much longer to digest food and pull out the material that [is] then circulated through the body.”

“It could be that an effect comes within 30 minutes to an hour, or it could be several hours later if you have a digestive system that's fairly slow and empty, versus smoking,” he adds.

It’s thought that these variable waiting times can also be compounded by pre-existing digestive disorders, such as Crohn’s disease. Although how such stomach issues actually affect the metabolism of cannabinoids isn’t entirely clear yet.

Factors that could affect the digestion of edibles:

“We don't know exactly in all cases how those [cannabinoids] are going to be metabolized by individuals, because some people may metabolize them faster than others,” Garrett says.

“So depending on whether or not you have an underlying digestive disorder, that might delay your uptake through the body…. we haven't really done any studies to know what the bio-availability of edibles are in those given conditions.”

How long do edibles stay in your system?

The growing popularity of marijuana edibles raises a lot of questions for legal regulators. How much THC is too much? Should there be a spending limit? And what warnings should be given on the labels? But for the voracious customer unfortunate enough to have overeaten, there’s only one question that matters: when will the nightmare end?

Well, best bunker down somewhere safe, because it's not going to stop anytime soon. As discussed, certain studies have found that the edible high peaks two-to-three hours after the consumption of edibles, while muted effects can often persist for five more hours or so.

In one study THC levels in the blood peaked 1 hour after consumption, but the effects didn’t peak until two hours later. 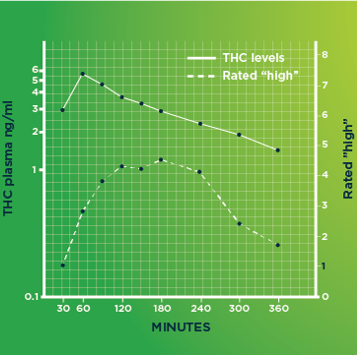 “Eventually, you'll get a peak plasma concentration and then your body will excrete [the cannabinoids] in, say, two hours,” Garrett explains.

But, again, this question of time is dependent on many factors, including how much was eaten and the gut health of the individual.

“I think the misunderstanding is that anytime you ingest it, you're going to get the same effect,” Garrett adds. “So you don't want to take too much to get the effect because it could be that you just don't have the ability to digest it through your GI (gastrointestinal) system and you might need to take it in a different way.”

To help better inform customers and producers, Garrett and his associated biotechnology company, Juno Metabolomics, are hoping to help conduct more research into the processes of edible digestion.

“We recently started thinking about how we can… enable improved development of products that can pass FDA inspection and translate to clinical tests, [which will] enable us to better measure why something is having the effect it does,” he says.

But while more studies could give the emerging edibles sector a healthy dose of scientific understanding, other scientists are concerned that what the industry really needs are health-focused regulations.

“We've got to be careful because THC and CBD in the edible industry [are] going to go into processed foods, things like chocolate bars, cookies, brownies,” Mike Rogers told Analytical Cannabis. “Anytime you eat a highly processed food there's risk for developing diet-related diseases. So, in creating edibles we are going to increase the amount of ultra-processed foods in the food industry, which is never a good thing.”