Heavy metals are one of several possible contaminants in cannabis and cannabis products, in addition to pesticides, microbial organisms, and residual solvents. The key metals of interest are cadmium (Cd), arsenic (As), lead (Pb) and mercury (Hg). These four heavy metals fall into the US Federal Drug Administration (FDA) Class 1 category, which lists substances that are “human toxicants that have limited or no use in the manufacture of pharmaceuticals.” Heavy metals are known to be highly toxic, especially because the body is unable to remove these metals efficiently after exposure. The metals accumulate over time, so frequent, extended exposure is a major concern. Although studies on heavy metals contamination in cannabis, and direct studies on the health effects of such contaminants from cannabis, are currently lacking, the FDA recommends that “these four elements should be evaluated during the risk assessment, across all potential sources of elemental impurities and routes of administration” for all drug products, drug substances, and excipients. As cannabis becomes a more prominent commodity in this category in North America, government oversight at the local, state, and federal level is becoming more prevalent. While the recent legalization of cannabis products brings federal oversight to cannabis in Canada, it remains a Schedule I substance in the US; since regulations are instead introduced at the local and state level, testing requirements can vary significantly from state to state, and even from city to city.

With the final implementation stage of more comprehensive testing regulations that were phased in over the last year, California-based cannabis producers are now required to test for heavy metal contaminants in products intended for retail sale; under the full regulations, all cannabis harvested or products manufactured in the state of California on or after December 31st, 2018 must be tested for Class 1 heavy metals. Because the toxicity of these elements can depend on the route of administration, i.e. whether it is inhaled or ingested, the acceptable values can differ depending on the type of product. Most localities follow the guidelines provided by the FDA, including those taking effect in California; based on consumption levels of up to 10 g/day, the acceptable limits are as follows:

Studies on heavy metals contamination in cannabis, and direct studies on the health effects of such contaminants from cannabis, are currently lacking. Although not unknown, cases of serious heavy metal toxicity from cannabis are rare, particularly as many states with some variation of legalized cannabis have already implemented heavy metal testing and follow the guidelines of the FDA. Dr. Chris Hudalla is the Founder and Chief Scientific Officer at ProVerde Labs and has been instrumental in bringing cannabis testing regulations to Massachusetts following its legalization for medicinal use in 2012.

“When the regulations first took effect in Massachusetts,” says Chris Hudalla, “cultivators had to work on improving the quality and safety of their products, and both have since increased dramatically. Most growers are now extremely sophisticated, using highly purified water and growing media, and it hasn’t been a major concern in recent years. Our analyses have shown very low rates of heavy metal contamination.”

Dr. Don Land is a Professor of Chemistry at the University of California Davis and the Chief Scientific Advisor of Steep Hill Labs, which began in California and now runs cannabis testing labs across North America and Europe. “In states where heavy metals testing is required, we’ve seen very low contamination rate - nowadays typically less than 1%,” says Don Land. 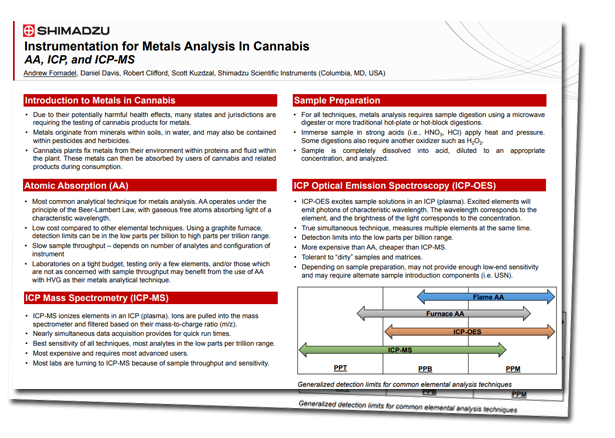 Due to their potentially harmful health effects, many states and jurisdictions are requiring the testing of cannabis products for metals. Cannabis plants fix metals from their environment within proteins and fluid within the plant.

Heavy metal contamination can occur at three stages: during the growth cycle, during processing, or post-processing. Cannabis is known to act efficiently in the uptake of heavy metals from soil. While this might be favorable for some applications, such as using industrial hemp for soil remediation, this could be problematic for producers, and ultimately consumers. However, this does not appear to be the case. “Hawaii uses a lot of their natural terrain for cultivation, and producers were worried about mercury from the soil, but that hasn’t been an issue,” says Don Land of Steep Hill Labs, “Nevada was worried about runoff from mining, but it also hasn’t been a problem there.”

The equipment that is used during processing can transfer contaminants to the product if producers are not cautious. “Most of the contamination we have seen does not come from the cannabis itself, but rather through the processing process.” Chris Hudalla of ProVerde Labs says. Another potential source is soil amendments and fertilizers. “Even though these may test below acceptable limits in batch tests, continuous, repeated application can lead to accumulation of heavy metals above the limit in the plant,” says Chris. This is where Steep Hill has seen contamination originating most in its labs: “For most of the cases I’m aware of, violations have come through some sort of soil amendment or treatment that was contaminated,” says Don Land.

The California regulations state that edible products that fail tests must be destroyed, but if heavy metal accumulation has occurred in plant products, they could be salvaged. “The good news for producers is that a batch of flower that is contaminated is not necessarily a total loss,” says Chris Hudalla. “Because heavy metals are poorly soluble in organic solvents, the flower can still be used to produce extracts and concentrates without the metals carrying through to the final product.”

There are several ways heavy metal content in cannabis products can be measured, with the main methods being inductively coupled plasma-mass spectrometry (ICP-MS), inductively-coupled plasma-optical emission spectrometry (ICP-OES), and atomic absorbance spectrometry (AAS). The instrumentation used by both ProVerde and Steep Hill, ICP-MS, is generally considered the gold standard, as it offers the best sensitivity - it is capable of reliably measuring metal concentrations in the realm of parts per billion. The sample is first digested in strong acid before being ionized at high temperatures. While the instrument is highly reliable once properly installed and with proper staff training, this can be a significant financial investment for labs. “Ideally you would have two of them, so you can keep testing in case one breaks down,” says Don Land.

Testing for contaminants like heavy metals is vital for advancing cannabis research if the industry is to keep growing sustainably, and producers and consumers rely on labs with cannabis expertise to provide this service. “It’s a long process to get a legitimate lab up and running. The cannabis plant is extremely complex, and all of the methods we use, we’ve had to develop ourselves,” says Don Land. “Labs are often competing when it comes to turnaround time, but producers should be leary of labs that offer turnaround times of less than 24 hours. It’s nearly impossible to do thorough testing on everything that quickly.”  The added cost of heavy metals analysis could be a factor for producers who are focused on profits, and there can be a lack of transparency in the legitimacy and quality of test results presented to consumers. “It can be very hard for a consumer to tell if test results are legitimate, so I would recommend that they always check that a product has been tested before acquiring it, and also verify the results instead of relying on producers to abide by the standards,” says Don Land. Most regulatory authorities, including the state of California Bureau of Cannabis Control, will not accept results from labs unless they hold ISO/IEC 17025 accreditation, which is the international standard for good lab practices to consistently produce valid results. Consumers should verify a laboratory’s report and check that the laboratory has an accreditation appropriate for the testing they are providing. “Verifying that accreditation is very easy,” says Chris Hudalla, “and one of the best ways that consumers (and regulators) can have confidence in the data that appears on an accredited laboratory’s certificate of analysis.” Consumers can verify ISO/IEC 17025 status through the lab’s accreditation body, for example Perry Johnson Laboratory Accreditation, Inc., which accredits ProVerde Labs, or The American Association for Laboratory Accreditation (A2LA), which accredited Steep Hill’s new lab in Pennsylvania last year.

Concerns about general contaminants in cannabis are greatest for immunocompromised individuals, who are especially susceptible to infections from microbial organisms. Compared to microbial contaminants, the effects of which can be observed shortly after exposure, concerns from the long-term effects of heavy metal accumulation are generally of lower priority. “Heavy metal contamination is a relatively small problem that can be solved,” says Don Land. “It’s important for producers to identify the sources and eliminate them.” Because cannabis research has been so tightly controlled, and due to the phytochemical complexity of the plant, it is still difficult to make conclusive judgements on the long-term toxicity of heavy metal contaminants. “Many of the people we work with are young children - as young as 13 months - who are dealing with epilepsy,” Chris Hudalla explains. “Our hope is that these children will remain on cannabis therapies and experience seizure relief for decades.  For that long-term exposure to cannabis, these contaminant issues are critically important.”

Despite the challenges of ever-changing legislature in a long-scrutinized industry, the breadth of emerging research on benefits of cannabis, along with improved testing regulations for heavy metals and other contaminants encourage a positive outlook for consumers: “It’s still a difficult time for consumers,” says Don Land, “but it’s better than it’s ever been.”

Cannabis Sales Peaked Again in Late March, But Then Declined

Advances in Cannabis Extraction and Processing

How to Detect and Prevent Microbial Contamination in Cannabis: Going Beyond Compliance Testing Covid-19 Could Delay Cannabis Legalization in New York and Mexico There’s No Significant Difference Between Recreational and Medical Marijuana in the US, Study Claims Which US States Have Kept Cannabis Businesses Open During Coronavirus Restrictions?