Complete the form below and we will email you a PDF version of "Fighting Poor Air Quality in Cannabis Cultivation: A Q&A With Filtr Revolution"

Cannabis is famously followed by a unique odor, but not everyone is a fan. In the city of Denver, Colorado, for instance, complaints over the smell around cultivation facilities became so numerous that city officials imposed stricter odor regulations on such growing facilities in 2016.

With more states permitting cannabis cultivation every year, the need to curb marijuana’s aroma is ever-growing. But how can it be done?

Analytical Cannabis spoke to one producer of air filtration solutions, Filtr Revolution, to find out.

Filtr Revolution is a portable, mountable solution for removing the airborne plant pathogens that can become the mold, pollen, and bacteria problems. The company utilizes the same HEPA-based (high-efficiency particulate absorbing-based) capture and removal technique found in the world’s cleanest environments.

Providing a commercial-grade solution to supplement an indoor facility’s microbe control program, Filtr Revolution can support a facility’s HVAC (heating, ventilation, and air conditioning) system by attacking the particle problem directly, while the app-based control and monitoring system can provide email alerts to temperature, humidity, VOC (volatile organic compounds), and particle levels that fall outside of set points, helping to avoid potential stress events and discovering early outbreaks. In today’s regulated market, early detection and continual protection are the key to profitability, and the Filtr Revolution delivers to help clients operate smart from the start.

Leo Bear-McGuinness (LBM): Which particles are a risk for cannabis facilities? And how does poor air flow exacerbate these risks?

Jason Hadley (JH): Cannabis is traditionally at risk from a variety of molds, pollens, dust, and plant pathogens that can attach to airborne dust. With cannabis plant pathogens as small as one micron (1/25400thof an inch), traditionally turbulent airflow from HVAC, supplemental fans, doors opening and closing, and employee movement typically means plant pathogens remain suspended in the air until they find a suitable location or transportation mechanism. Furthermore, as most HVAC systems are based on cooling capacity versus air filtration, and as the industry as a whole is forced to control microbes by operating much like food and pharma facilities, the particles that threaten plants are often entering, thriving, and traveling faster than cleaning and filtration changing standard operating procedures can control.

LBM: If no air filtration system is in place, what outcomes are cannabis facilities risking in their products?

JH: To be fair, if indoor facilities run HVAC, there is often a particle filter within it. However, it more often comes down to the balance of what kind of filter is best and what works within the mechanical limits of your system, as well as how often the filter cartridge is changed. In cases of licensed facilities with no filtration at all, substandard filtration, and/or improper maintenance, the individual state microbe compliance regulations are the stop gap to prevent product tainted with Aspergillus, E. coli, and Salmonella from ever reaching retail shelves. However, when those compliance models fail, or customers seek product made in the illicit markets, you expose yourself to the same potential hazards as found in mainstream manufacturing, with the main difference being that cannabis as an inhaled product bypasses the body’s natural impurity filters. At best, these pathogens can live and breed within your lungs, leading to a host of breathing issues. At their worst, these pathogens are provided a direct path to the blood stream at smaller particle sizes that can present issues and symptoms within your circulatory system and associated areas of the body at large. 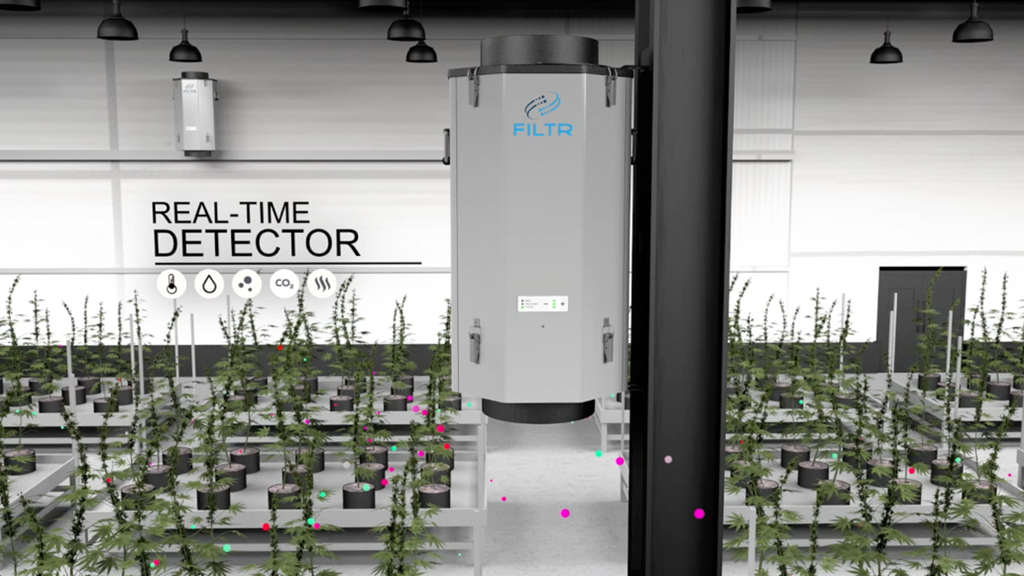 LBM: What kind of air filters are available to remove these particles? And how do they work?

JH: Air filters come in a variety of shapes, sizes and quality. However, the filter cultivators want to deploy is one rated to capture their smallest particle threat. Filters essentially act as a net whereby particle-laden air passes through as the filtration media’s tiny strands create a matrix for particles to physically impact or attract, cleaning the air as it returns to the ducting. Considering the smallest particle threats to Cannabis plants being one micron and up, it often depends on the rating of the media used, which can result in filtration efficiencies as low as 50-75% on the low end, to HEPA’s 99.995% on the high end.

LBM: What are the pros and cons of each type?

JH: Filtration used in the native HVAC infrastructure has limits based on the force of air being generated against the thickness of the filtration media. In practical terms, if you deploy a higher-rated filtration cartridge, you must change it often enough to prevent clogging, which will present itself in diminished cooling capacity and in extreme cases a reduction in the product life cycle of the HVAC mechanical components. Supplemental air filtration such as Filtr Revolution can be deployed to support lower-rated HVAC filtration by addressing the particle problem specifically, thus putting less dependence on the HVAC system’s filtration, particularly within facilities where monitoring and maintenance of the HVAC filter is not as diligent.

LBM: Furthermore, how does air filtration compare to other decontamination methods such as ozone and UV light exposure?

JH: To provide context, whether in the air or on a surface, plant pathogens have a required contact time needed in order to kill the particle. Pathogens must be exposed to a light or chemical reaction for a specific amount of time to inoculate the threat, meaning that in the case of products used to treat the air, you must give up air exchange rates to complete the reaction. The result is a lack of efficiency in treating the commercial-sized spaces often found in cannabis, especially when compared to a Filtr Revolution unit that operates by aggressively recirculating air to simply remove the particle from the environment. In other words, you don’t have to kill the particle as other devices claim is needed, and they often don’t even meet that claim.

Remember, one Aspergillus spore allowed to mature will produce 10,000 more as part of its reproductive cycle. Keeping that fact in mind, Filtr Revolution, just as in highly-regulated cleanroom environments, operates by diluting the area with cleaner air. The result of simply removing the particle altogether delivers a greater chance of removing threats and eliminates the liability associated with “kill-style” reactions that fail to remediate a shadowed particle which is then sent back out into the space essentially untreated, and/or they can fail to complete the reaction or eliminate the pathogen corpse, which in both cases are also sent back into the environment to perpetuate your problem or provide a food source for something else.

LBM: And how would a cannabis facility utilize a Filtr Revolution air purifier?

JH: Cannabis facilities would be wise to deploy Filtr Revolution anywhere people and plants are in contact, as well as in common areas where people can cross-contaminate critical areas. This would include nursery and vegetative space, flowering and drying spaces, trimming and processing, and hallways or general employee foot traffic areas. With Filtr Revolution providing 10,000ft3with refreshed air roughly every 17 minutes, cultivation sites can simply add up the cubic volume of their critical areas, divide by 10,000, and determine the number of Filtr Revolution units needed to maintain Filtr Revolution’s recommended 3.5 air exchanges per hour. Additionally, thanks to the 98.5 ft2 of filter media provided within every Filtr Revolution HEPA filter cartridge (twice as much as many competitors), Filtr Revolution’s recommends HEPA cartridges be changed only once a year, and perhaps every nine months in trim and dry areas. To help keeps facilities on their maintenance schedules, Filtr Revolution’s app controls are designed to alert users to change-out needs for not only the HEPA cartridge, but also the included carbon filter, and when to wash as replace the unit’s prefilter media.

Jason Hadley, engineer at Filtr Revolution, was speaking to Leo Bear-McGuinness. Questions and responses have been edited for clarity.