Complete the form below and we will email you a PDF version of "Don’t Blame THC for the Vaping Crisis, Blame the Illegal Market, Say Experts " The US’s “vaping crisis” is escalating. As of October 15, the Centers for Disease Control and Prevention (CDC) has associated the deaths of 33 people and the lung injuries of 1,479 others with the use of e-cigarettes – an increase on the 26 deaths and 1,299 injury cases announced the week prior.

In their response, regulators have strongly advised consumers to stop using vaping products, particularly those that contain THC; around 78 percent of affected users reported using THC vapes, according to the CDC.

But, as the chemical cause of the lung injuries remains unknown, many lab analysts in the cannabis industry say that such broad warnings against THC are missing the real problem: the illegal vaping market.

“It's not the THC that's making people sick, and I think that's a really important distinction to make,” says Dr Swetha Kaul, the chief scientific officer at Cannalysis, a state-licensed cannabis testing facility in California.

Kaul and her team at Cannalysis recently developed a method for detecting vitamin E acetate, a cosmetic compound thought to be the cause of the vaping-related illnesses. “If you look at your ingredients in your house, you can probably find [vitamin E acetate] pretty easily,” Kaul says. “It's very safe for consumption orally, but we really don't know [its] inhalation toxicity.”

This new method was put to the test when Kaul’s team screened 112 random cannabis vaping oil samples from 20 company partners for the vitamin E derivative. Not one product contained the repudiated compound, which didn’t come as a surprise to Kaul.

“Vitamin E acetate is very heavily used in the illegal vaping market; 20, 30, 60 percent of a cartridge could be vitamin E acetate,” she explains. Why is the vitamin solution so prevalent in unregulated products? Well, according to Kaul, “vitamin E acetate is extremely viscous and it's cheaply available, so it makes a perfect cutting agent. So if you're working on the illegal side and you want to fill more cartridges, it's easier if you can cut it with something.”

Cannalysis’ study didn’t test any illegal e-cigarettes for vitamin E acetate, but another study from a different Californian cannabis lab did. Out of 12 illicit vaping products tested in the southern California area, 9 contained vitamin E acetate and all had detectable levels of pesticides, according to the lab company CannaSafe. And just like Cannalysis’ analysts, Cannasafe’s team didn’t find any vitamin E acetate in the 104 legal samples they tested. 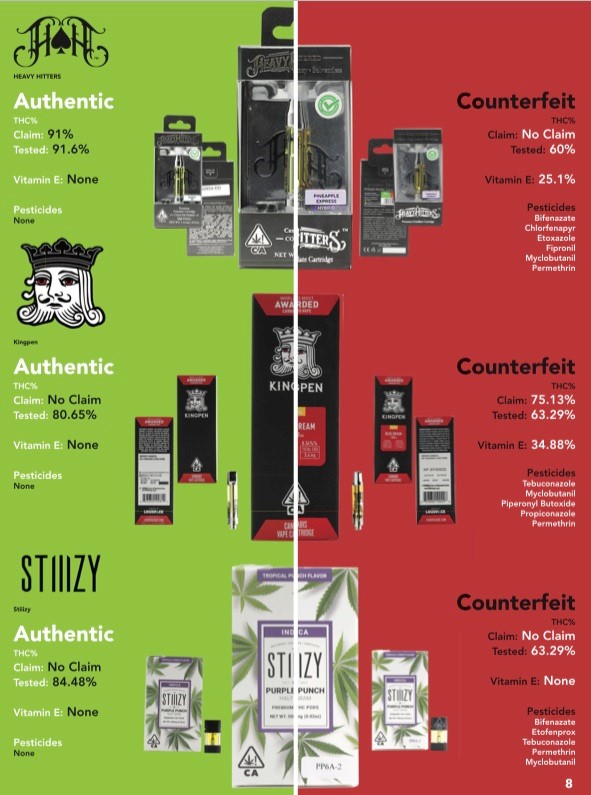 A comparison of legal and illegal vaping products’ contents, courtesy of CannaSafe.

Although neither of these studies can prove that vitamin E acetate is the culprit behind the current “vaping crisis,” both found the suspected substance to be entirely absent from the legal cannabis vaping market.

Regardless, the FDA is still advising consumers to completely avoid vape products that contain THC, whether bought from legal dispensaries or “obtained off the street.” But by lumping both markets into the same cautious category, lab analysts like Kaul are concerned that regulators are creating a false equivalence and pushing consumers to buy untested products.

“Right now, people are doing a general fear-based campaign against vaping,” she tells Analytical Cannabis. “But I feel like it can be so much more effective if you make people afraid of illegal products.”

Even in states that have legalized cannabis, counterfeit THC cartridges are often cheaper than the licensed, tested, and taxed products. It’s an economic factor that helps keeps the illicit market reportedly three times the size of its legal counterpart. A regulated vape pen with half a gram of THC costs $55, while an untested, illicit product can be worth $25 or less on the street.

“My fear is that if you cripple the industry that's actually taking the steps to deal with it, more people are going to fall sick,” Kaul adds. “If you have any kind of ban, you're effectively pushing them more towards an illegal market.”

“These black market products are not safe and are too readily available. Banning vapes would leave those illicit products as the only ones available,” Aaron Riley, Cannasafe’s president, said in a statement. “The opportunity is to educate the public, government, and media on the real risks of purchasing products from illicit markets.”

The CDC is currently working with states and other federal agencies to identify the true cause of the vaping illness outbreak. But as the process could take months, lab analysts like Kaul say that vaping customers should be better informed of the legal market’s higher testing standards in the meantime. Through that messaging, she says, consumer safety will likely be higher, too.

“The safer option is to shop [for] legal, tested products. I feel like that's the messaging that might resonate,” she says. “Because if you just tell people to stop vaping, they're just going to ignore the entire message. So how about giving them a route where at least their chances of staying safe are higher and better?”