Cannabis Distillate: What Is It and How to Make It?

Complete the form below and we will email you a PDF version of "Cannabis Distillate: What Is It and How to Make It?"

A distillate is a highly purified cannabis product usually containing only one cannabinoid in high concentrations. Some THC distillates, for example, claim to contain as much as 99% THC.

How to make cannabis distillate

Before any cannabinoids can be distillated, they must first be prepared and extracted. As outlined by Jon Thompson and Matt Anderson of extraktLAB in this previous Analytical Cannabis article, this preparation process typically involves the following steps: From here onwards, the cannabis extract is ready to be decarboxylated and then distilled, a process that removes the remaining solvents from the winterized solution. This requires heating and cooling equipment and a vacuum pump system to control the temperature and pressure.

How to distill THC and CBD

The standard way to achieve all these steps is called short path distillation.

“A common class that covers a range of distillation equipment is referred to as ‘short path’ but really isn’t due to the fact that the condenser is external to the evaporator,” extrakLAB’s Thompson and Anderson wrote in Analytical Cannabis previously.

“More accurately termed ‘fractional distillation,’ this kind of equipment is typically constructed of glass and is used for solvent removal and distillation on a laboratory scale due to its relative simplicity, small footprint, and lower price tag.”

However, many extractors, like Thompson and Anderson, prefer a method which ensures that the evaporated cannabinoids barely make contact with the heat source, reducing the risk of damage. This method is called thin film distillation.

“This will create a thin film of oil across an evaporative surface. This, coupled with vacuum pressure to lower boiling temperatures, ensures that the evaporated components (cannabinoids in this case) aren’t in prolonged contact with the heat source reducing the risk of damaging them.”

Despite these benefits, plenty of extractors opt to use rotary evaporators.

“Likely the most commonly used equipment for solvent removal, rotary evaporators, or roto-vaps, utilize a rotating round bottomed flask to create a thin film,” Thompson and Anderson continued.

“The heat source is reliant on a warm bath that the round bottom flask rests in. This is particularly good solvent removal at a small scale, but is discontinuous. This means it’s generally not a scalable technology if you have a lot of solvent to remove.” 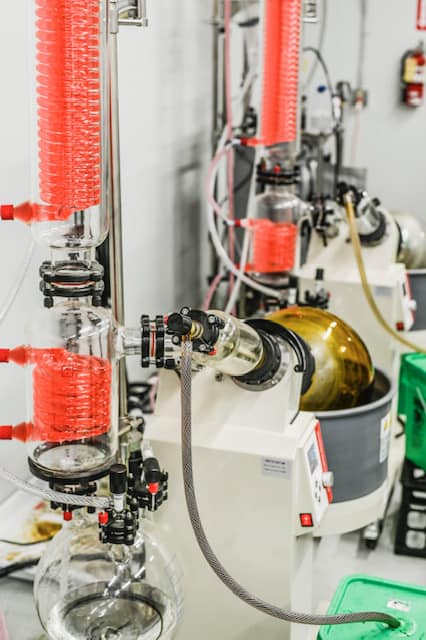 Rotary evaporation alone, though, can’t cope as the extract gets more refined and its viscosity increases. This is why wiped filtration must be introduced.

“Wiped film distillation machines use mechanical wipers that spread a thin layer of oil across a heated evaporative surface allowing the cannabinoids to evaporate and recollect on a chilled condenser that is only a short distance away,” Thompson and Anderson wrote.

“At this point, the final product could contain numbers of cannabinoids as high as 90% or more and should also be a nice golden color.”

How are distillates used?

Distillate products such as dab wax, shatter, and THC oil have risen in popularity since the early 2010s. They're preferred by seasoned consumers looking for a potent, instant high.

To consume solid distillates, such as shatter, many consumers opt to "dab" them, a process that involves heating a small amount of distillate with a nail, often an electrically controlled nail (e-nail) that allows temperature control. Some consumers have been known to take a more makeshift approach and heat a ceramic, titanium, or quartz nail with a crème brûlée torch. However, this is unlikely to produce a consistent temperature. All consumers then inhale the resultant vapors.

Liquid distillate, such as THC oil, can be consumed sublingually (under the tongue).

What is the difference between concentrates and distillates?

The extraction processes used to produce concentrates don't necessarily remove other plant compounds like terpenes. So, unlike distillates, cannabis concentrates retain some of the terpenes naturally found in the cannabis plant.  However, distillates can also contain terpenes; they just have to be added in again after separation.