Cannabis and the Workplace: What You Need to Know

Complete the form below and we will email you a PDF version of "Cannabis and the Workplace: What You Need to Know"

Marijuana legalization has brought many benefits to the regions that have enacted it. Millions of patients worldwide can access the medication they seek to alleviate pain and other symptoms, and hundreds of thousands have gained employment in every corner of the industry. But cannabis’ legality has brought its fair share of issues, too.

And in a post-prohibition society, one conundrum is on a lot of employees’ minds: If weed’s legal, can I tell my co-workers I use it?

It’s an understandable dilemma. After all, despite a shift in society’s view of cannabis, the stoner stereotype still persists. And what employer wants to hire a shambolic layabout?

So, while institutions adapt to the “new normal” of legal cannabis, what do users need to know before they announce their lifestyle to their trusted colleagues?

The older workforce is more sceptical

Perhaps unsurprisingly, studies have shown that older employees carry a far more negative view on cannabis use than younger workers. In one survey, 46 percent of employees aged over 30 said they would lose confidence in a co-worker if they found out they smoked marijuana, even if they were living in a state where recreational use was legal.

These colleagues were “concerned about having to pick up the slack for a co-worker who may not be operating at full capacity,” according to Dean Debnam, CEO of Workplace Options, the company that lead the survey.

“Employees are wary of the thought that their co-workers can get high after work and then come in the next day and function with no impact on their performance,” he stated to Fortune.

On the other side of the age divide, the study found that employees under age 30 had far fewer cannabis qualms. Around 70 percent of these young workers said they wouldn’t hesitate to rely on a colleague who smoked weed outside the workplace.

And as the years go on and more young people enter the world of work, it’s likely these more approving attitudes will become workplace norms.

Back in 1986, President Ronal Reagan signed an Executive Order that would establish a “drug-free federal workplace” by making it a condition of employment that all federal employees refrain from using illegal drugs on or off duty.

Three decades later, and the estimated 7-9 million federal employees are still required to pass a drug test. And following precedent, many other workplaces have their own drug-free policies.

But when cannabis is legal in some form or another in over 30 states, workplace drug tests are starting to drop out of fashion.

In a recent survey by Marijuana Doctors, 1 in 5 Americans said they would decline a job offer if they knew the company required a drug test. And again, the younger respondents, aged 18-24, were more likely to pass on the opportunity.

For most officer workers, the major day-to-day safety hazard is spilling a cup by the watercooler. But in other professions, an employee’s day isn’t so risk-free.

In the construction industry, for example, workers can often be operating large machinery and carrying heavy equipment. As cannabis can impair a user’s coordination and motor skills, any laborer under its influence can pose a serious health risk to themselves and their colleagues.

But in more hazard-free environments, the risks of cannabis can be less clear. 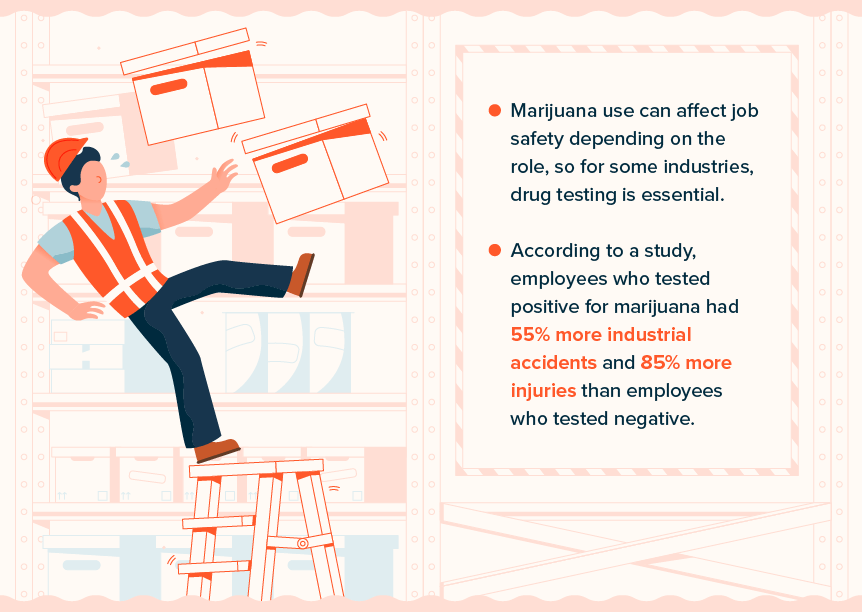 Can anyone be fired for smoking legal marijuana?

"It really depends on the state you live in," say Marijuana Doctors.

"In some states, like Illinois, if you hold a school bus permit, commercial driver license or are an active duty law enforcement officer or correctional probation officer or firefighter, you cannot hold a medical marijuana card and will not be eligible for Illinois’ program. There are obviously some jobs, in legal or even recreational states, where nothing requires an employer to waive a drug test."

In most US states – even if they allow for medicinal or recreational use – employees can be fired lawfully if they use marijuana after agreeing to a drug-free work policy. At the time of writing, only Maine protects recreational cannabis use outside of the workplace.

For medical marijuana users, these workplace protections become a little more varied depending on the state they live in. Many regions do have some protections in place for cannabis cardholders who fail drug tests upon hiring. Some of these states include Arizona, Arkansas, Connecticut, Delaware, Illinois, Maine, Massachusetts, Minnesota, New York, Pennsylvania and West Virginia. A full guide to such protections (or lack thereof) can be found here. 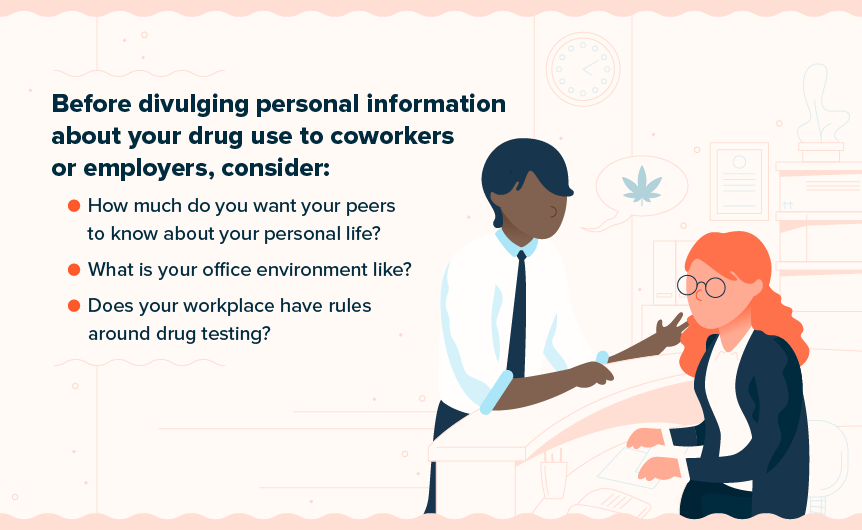 So, should employees be open about their cannabis use?

How much personal information to divulge at work is always an individual choice. And from hobbies to household grievances, those personal details are inevitably shared with close colleagues. But cannabis is different. Aside from its connection to lethargy, as a potent symbol of the war on drugs, identifying with the plant can risk associating oneself with criminality, too. Even in these progressive times, prejudices persist.

So before any drug activity is disclosed, a regular cannabis user should know their workplace drug policies, their state protections for dismissal, and whether their habit could endanger themselves or their colleagues. From there, the choice is ultimately up to them and the comfort they feel around their co-workers.