Cannabinoid profiling is about more than just measuring the potency of a strain or a product. With over 70 known cannabinoids present in the cannabis plant – many of which are pharmacologically active – alongside numerous other terpenes and phytochemicals, it is important that researchers and testing staff look at more than just the THC content when examining cannabis material.

“There is ongoing research about the pharmacological actions of various cannabinoids and other cannabis constituents,” says Dr Holly Johnson, chief science officer at the American Herbal Products Association. “Looking at the wider fingerprint of cannabinoids and other phytochemical constituents of a given extract may be of interest to consumers seeking certain types of benefits.”

But how exactly do analysts profile and study these dozens of cannabinoids?

A spotlight on HPLC-DAD

Though each individual lab may have its own preferences, across the industry the most popular method of analysis appears to be high-performance liquid chromatography coupled with a diode array detector (HPLC-DAD).

“With advances in instrumentation and separation technology, HPLC-DAD has gained popularity for cannabinoid analysis for a variety of reasons, including short run times and low limits of quantification for each analyte,” explains Johnson.

HPLC is a column chromatography method, which works by passing a sample dissolved in solvent through a column which contains a stationary phase, normally silica particles, under high pressure. Surface interactions between the analytes in this solvent and the stationary phase will cause different analytes to move through the column at different speeds according to the polarity of each compound, effectively separating out each analyte into fractions. As an analytical method, HPLC can be easily automated and is highly sensitive, which has made it a popular choice for analytical laboratories.

These diode arrays are used to record the ultraviolet and visible (UV-vis) absorption spectra for each analyte that passes through the HPLC column. Unlike a standard UV-vis detector, a DAD/PAD uses multiple photodiode arrays to gather data over a wide range of wavelengths at once. From the resultant absorption spectra, scientists can identify and quantify the cannabinoids present and construct a full cannabinoid profile for the sample.

“The scope of the OMA (2018.11) is for cannabis inflorescence, oils, and extracts, and results are reported on an as-is basis. In October 2019, the USDA released a rule requiring that analytical results for total THC content must be reported on a dry weight basis; AOAC evaluated additional data and OMA 2018.11 has now been modified to include procedures and calculations for reporting total THC on a dry weight basis for compliance with the USDA regulation. This is a long-needed tool for the industry to be able to really compare results among labs.” 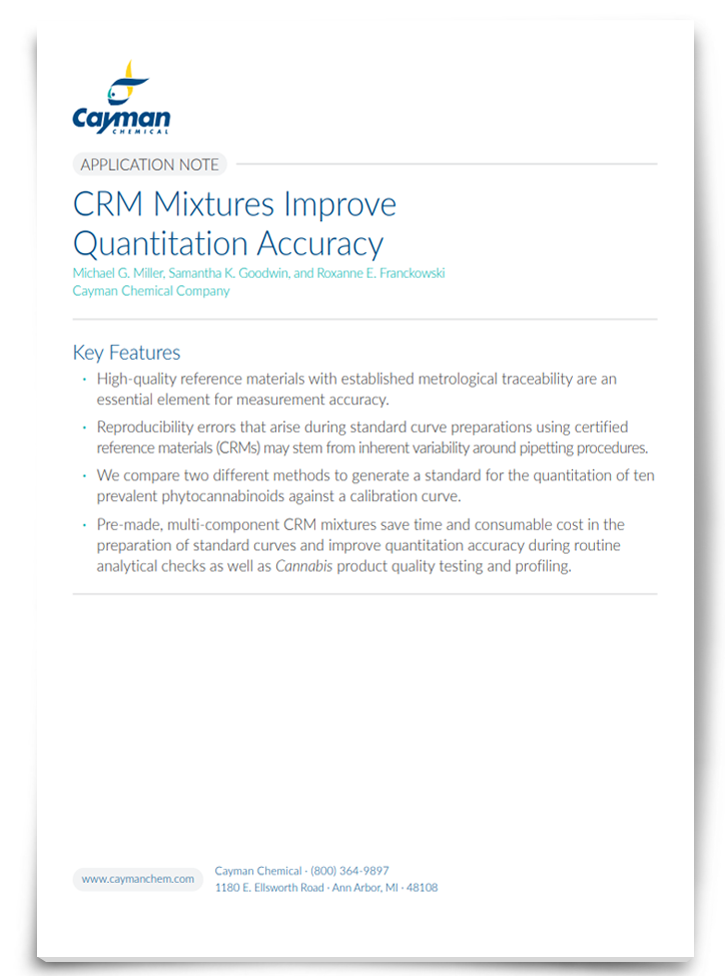 To ensure the competency of the cannabis testing laboratories, it is essential that they maintain metrological traceability of measurement results; using certified reference materials (CRMs) produced under an ISO 17034 quality system can be used to achieve this requirement. Historically, single analyte CRMs have been the default option for quality control testing, mainly due to the lack of availability of multi-component CRMs. Now that multi-component CRMs are available, they provide an advantage in many applications. Download this app note to discover a method that streamlines the quantitation of multiple phytocannabinoids.

HPLC-DAD is not the only analytical method used to provide full cannabinoid profiling. Liquid chromatography time-of-flight mass spectrometry (LC-TOF-MS) is also used by some research laboratories for cannabis profiling, in order to distinguish between cannabinoids and other endogenous compounds, such as terpenes, more clearly.

LC-TOF-MS systems usually leverage high-resolution accurate mass (HRAM) spectrometry, which negates matrix effects and other chemical interferences more effectively than HPLC-DAD. For this reason, LC-TOF-MS is preferred by drug discovery and development scientists who may be looking for a higher-precision method to carry out drug metabolism and pharmacokinetics studies.

However, no method is perfect. By virtue of the mass spectrometry method, if another chemical component in the cannabis sample happens to have the same accurate molecular mass as a cannabinoid, the method will not be able to differentiate between the two.

Another method that is sometimes used is gas chromatography coupled with a flame ionization detector (GC-FID). Gas chromatography-based methods are used less commonly now for full cannabinoid profiling, but are still employed for potency testing purposes.

The main benefit of the GC-FID method is its speed and simplicity, though it does suffer by virtue of the fact that GC cannot detect THCA or CBDA directly – the heat applied during the GC method decarboxylates these compounds into THC and CBD, and may also affect other heat-sensitive compounds in the cannabis sample. For products that are intended to be smoked or vaporized, this application of heat during the analysis process may not be a problem as the final products are intended to be heated during consumption. But, in general, an LC-based method is preferred by most laboratories.

Many of the most notable recent advancements within cannabinoid profiling have come from the regulatory space. As the cannabis and hemp industry grows and in the absence of strong federal oversight, it is crucial that the industry holds itself to strong quality testing standards.

“I think self-regulatory initiatives and education are absolutely imperative to the future success of the cannabis and hemp industry,” says Johnson. “There are companies that intend to be around for years to come, and we as an industry would like to see responsible companies be able to offer high-quality products to consumers.”

“The American Herbal Products Association (AHPA) has historically led initiatives for botanicals industry standardization that have been codified by FDA (Food and Drug Administration), such as Herbs of Commerce, 1992. The current efforts by a variety of stakeholders – and the recognition of cannabis as an article of commerce by standard-setting bodies, like USP and AOAC International – is indicative of the necessity to bring quality standards for cannabis materials into the regulated US federal system.”

“AHPA formed a Cannabis Committee in 2010, recognizing the relevance of cannabis as a natural product and the need for quality control standards. AHPA’s Cannabis Committee issued recommendations to regulators in 2013, and continues to provide guidance to stakeholders on issues from cultivation to product labeling. AOAC consensus standards are codified in the Code of Federal Regulations – kind of a big deal.”

As analytical techniques become more advanced and research continues to discover more information on the many constituent parts of the cannabis plant, consensus standards like those being developed by these industry groups will come to form the foundations of all essential best-practices within the cannabis and hemp testing industry. These voluntary efforts taken today will also shape the way that legislators and regulators proceed in future cannabis reform endeavors.