Basic Research and the Mechanism of Action of Ketamine

Ketamine was identified by the World Health Organization (WHO) as an essential medicine in 1985 and remains so. The substance is especially useful as a fast-acting anesthetic and analgesic agent, which neither depresses respiration nor lowers blood pressure. The WHO recommend that ketamine should not be a controlled drug.1

Despite this, in 1999, the US Drug Enforcement Administration placed ketamine in Schedule 3 of the Controlled Substances Act. This status denotes that the drug’s abuse may lead to moderate or low physical dependence or high psychological dependence. Ketamine is widely abused because of its ability to produce dissociative sensations (a sense of detachment) and hallucinations.

There are a range of street names used to describe ketamine, such as Special K, Kit Kat, Super Acid, and others. A 'Special K trip’ is touted as being better than LSD or PCP because of its relatively short duration but profound effects.

China have repeatedly pushed for a global ban on ketamine because of its concerns about the extent of its abuse.2 So, all in all, it is a drug of contradictions – essential medicine or dangerously abused substance?

The initial synthesis of ketamine came about as a result of the efforts by the Parke-Davis Pharmaceutical company chemists to develop an improved anesthetic and analgesic agent, based on its earlier molecule phencyclidine (CI-395, PCP, angel dust). Ketamine was synthesized in 1964 as CI 591 by Calvin Stevens and first used in human volunteers from a prison population by Ed Domino, of the pharmacology department at Michigan State University with the collaboration of Parke-Davis clinical pharmacologists.3 The problems that had beset the use of PCP were not apparently shared by ketamine, at least not to the same degree. Anyone who has seen patients emerging from ketamine anesthesia will recognize the temporary mild delirium that accompanies its use, and the initial volunteers described the sensation of feeling as if they were “floating in space” and somehow detached from their bodies. Because of this, the term dissociative anesthesia was proposed by Ed Domino’s wife and has entered into general use, although the Parke Davis executives were apparently uncomfortable with the phrase.

Over the next few years, clinical experience accumulated and ketamine became widely used as a battlefield anesthetic in Vietnam, becoming known as the “battlefield buddy”.4 In 1970, the drug was approved by the Food and Drug Administration (FDA) for use as an anesthetic agent, and by 1985 had entered onto the list of essential drugs of the WHO.

Its widespread use in the Vietnam War probably accounts for it becoming a widely used drug of abuse during the 1970s and onwards, initially in California following the return of Vietnam veterans to the US, but now more or less globally.

More recently, ketamine has become a drug of interest in the treatment of depression, with improvement in depression severity being seen rapidly, and in cases, lasting for long periods after a single ketamine experience.5 Consequently, ketamine clinics have proliferated in the US and sprouted up within other countries, too. Its S-isomer (esketamine) has been approved as a treatment for treatment-resistant depression.6 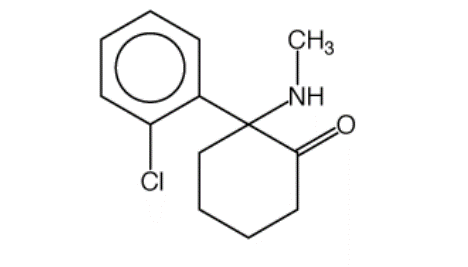 A molecule of ketamine.

Ketamine contains a chiral center at the C-2 carbon of the cyclohexanone ring, so that two enantiomers exist: S-(+)-ketamine and R-(-)-ketamine. Ketamine is a 1:1 racemic mixture. The molar mass is 237.725 gram-molecule (g/mol) and the compound is highly water soluble.

Ketamine has poor oral bioavailability (about 17%) due to first-pass metabolism, and is therefore subject to substantial between-individual variability. However, intramuscular bioavailability is high (93%), so it is most commonly used parenterally. Elevation of the pain threshold occurs at plasma concentrations above 160 ng/mL (nanograms per milliliter). Peak plasma levels of 5-10 micromolar (over 1200 ng/mL) are required to achieve anesthesia, and this target plasma concentration is worth bearing in mind when reviewing the pharmacologic literature. The major oxidative metabolite, norketamine, is also an NMDA antagonist, and also exists as a racemic mixture, but has about four times less potency. The elimination half-life in adults is around 2.5 hours.7

Ketamine has a complex pharmacology.8 Its utility as an anesthetic and analgesic has been attributed mostly to its activity as a non-competitive antagonist or allosteric modulator at the ionotropic glutamate receptor NMDA. It seems most likely that its recreational use can also be attributed to this, although the dose used for recreational purposes is lower than that used for anesthesia. Other compounds that act as NMDA antagonists include pethidine, levorphanol, nitrous oxide, and tramadol. But the story is more complicated than might seem apparent, since many NMDA antagonists do not share the analgesic and anesthetic effects of ketamine, let alone the euphorigenic effects and others are not used as drugs of abuse.

Speaking to Analytical Cannabis, Dr Roy Gray, director of pharmacology at Pangea Botanica, remarked the following about the drug’s abuse potential: “Where the mechanism of action is either unknown and / or due to poly-pharmacology, determination of abuse potential can become problematic.”

“Assessment of abuse potential is heavily dependent upon the assumption that all pharmacological targets have been fully elucidated and their abuse association determined. Furthermore, the opportunity to ‘miss’ a target is always possible since most of the studies recommended for abuse-related target identification are dependent upon orthosteric interaction. Many drugs do not engage targets in this way and instead have the ability to modulate the same target by binding to a different site not identified by such studies.”

Gary Stephens, professor of pharmacology at the University of Reading, agreed and pointed out that:

“More specifically for abuse potential, there are a number of preclinical tests that are used to predict whether a new drug is likely to cause concerns via activation of reward pathways, etc. A classic test is to determine how often an animal will self-administer a test compound (e.g., via a lever press) in comparison to a control and/or a known drug of abuse.”

Ketamine also has activity at a number of other receptors/enzymes, including nitric oxide synthase and ơ (1) and ơ (2) receptors, monoaminergic receptor systems, purinergic receptors and others, albeit at relatively high micromolar concentrations in some cases. The jury is still out regarding which elements of its diverse pharmacology are most relevant to an anti-depressant effect, and what role each enantiomer and their metabolites play. Ketamine is most commonly used as a single dose of 0.5 milligrams per kilogram (mg/kg) in depression, whereas the dose used for anesthesia is from 1 to 4.5 mg/kg. So it seems likely that mechanisms other than NMDA receptor antagonism play a part. Furthermore, NMDA receptor subtypes vary according to brain area for example, and it is not yet clear which subtype, if any, is likely to be most responsible for the anti-depressant effect of ketamine. Abdallah et al. propose that stimulation of AMPA receptors by ketamine may be a key factor in promoting neuroplasticity, increasing connectivity within the frontal lobes in particular.9 The ability of ketamine to inhibit nitric oxide synthase may bestow anti-inflammatory properties, and current theories of the pathogenesis of depression propose a role for inflammation.

Ketamine has high micromolar binding affinity for both ơ (1) and ơ (2) receptors, each of which seems to be involved in glutamatergic neurotransmission, and in modulation of cell membrane lipid composition, although it has to be said that the absence of a known endogenous ligand makes the physiologic role of the ơ-receptor somewhat speculative.

Furthermore, ketamine has been shown to increase dopamine levels in the cortex, nucleus accumbens, and striatum, at least in the rat brain. It has also been shown to inhibit serotonin uptake and to act as an adenosine A1 receptor agonist, albeit indirectly. Each of these aspects of its pharmacology may be relevant to its anti-depressant and to its euphorigenic effect (and to its analgesic effect).

When Analytical Cannabis asked Professor Gary Stephens how best to untangle to relevance of the diverse pharmacology of ketamine, he said:

“Good question! As above, it seems that we should test the enantiomeric forms, the (S) form appears to be active, but (R)-form not. We should also investigate metabolites. From a pharmacological perspective, testing ketamine in the presence of known NMDA blockers should reveal NMDA-independent effects. From a genetic point of view, testing ketamine in NMDA receptor knock-out animals (specifically the GluN2C subunit)should reveal NMDA-independent effects.”

How to try and synthesize these apparent contradictions in the pharmacology of ketamine, not least with a view to developing more effective antidepressants in future, is a challenge. Perhaps researchers should consider abandoning the current predominant paradigm of drug research, where a single target and precise mechanism of action is seen as the hallmark of a good drug. In the case of ketamine, it is feasible that several of these mechanisms, of both enantiomers of parent drug and its metabolites and others yet to be discovered, contribute together to its therapeutic effects. The concept of polypharmacology, together with the potential offered by ever-improving systems of data interpretation by artificial intelligence approaches, may yet take us to a new generation of effective anti-depressants. In the meantime, ketamine is acting as the first in a new generation of anti-depressant medicines.