Attack of the Ozones: How Oxygen Can Decontaminate Cannabis

Complete the form below and we will email you a PDF version of "Attack of the Ozones: How Oxygen Can Decontaminate Cannabis"

Once the hard work of cannabis farming is over and done with, there’s still one last step that no cultivator should forget: decontamination. Because after all that graft, no grower wants to have their product fail health and safety regulations – let alone harbor microbes and mold that could go on to infect a customer.

But how is cannabis best decontaminated? Well, there are several options. Many companies utilize a form of radiation, whether gamma, radio, or microwave. Some operations working on a budget may simply opt for heating, but this runs the risk of damaging the cannabis flowers. And others use oxygen.

At first, it may be strange to think of oxygen as a deadly decontaminant. After all, it’s the crucial ingredient in the air we breathe that keeps us alive. But too much of anything can be a bad thing. And one too many oxygen atoms can turn the gas deadly…

“Before we landed on ozone, we did look at other techniques used in food and beverage,” Ellsworth tells Analytical Cannabis. “But, honestly, nothing worked on cannabis; you can't heat it, you can't get it wet. So, a lot of the traditional methods could never be used. And so we determined ozone was the best method to get rid of microbial contamination.”

For those unfamiliar with the word, ozone (O3) is the name of a molecule made up of three oxygen atoms. As it’s quite unstable, the molecule often decomposes into the more common form of oxygen, O2. However, if kept stable, ozone can be used as a potent oxidizing agent. And it’s this oxidizing ability that makes the gas such an effective decontaminant for water treatment and agricultural disinfection.

But how exactly can a cannabis cultivation company generate and stabilize ozone?

“We invented these large chambers that produced ozone gas,” Ellsworth says. “So, the machines pull in ambient oxygen, concentrate the oxygen, convert that to ozone through an electrical charge, and then ozone floods the system.”

Realizing the potential for ozone decontamination in the cannabis and hemp sectors, Ellsworth and her team have spent the past five years finessing their brand of portable purifying chambers. To cleanse their cannabis, all a cultivator has to do is place the flower on a tray and in its ozone unit and press a button to start the oxidizing process.

“So, there’s flower inside the chambers,” Ellsworth explains. “And once the ozone flooded the system, it would start to oxidize any of the contaminants that were on the flower.”

This oxidation reaction leaves the cell walls of any present bacteria unstable, and eventually untenable. And once their cell walls are gone, the bacteria disintegrate.

But while an effective bacteria buster, the chamber can’t eliminate everything.

“We can’t effectively get rid of contamination that has grown within the plant,” Ellsworth tells Analytical Cannabis. “So, Botrytis [a common agricultural fungus], ozone can’t get rid of that.”

When presented with such systemic diseases, the best recourse may be to jettison the particular crop.

“What we deal with is more surface contamination,” she adds. “We see a lot of contamination that’s 'grown up' with the plant, and that’s almost impossible to get rid of with ozone.”

And obstinate fungi aren’t the only features that can cling to cannabis.

“There is a slight drawback to ozone,” Ellsworth admits, “and that is there’s remaining residual ozone molecules on the flower. A lot of patience and post-product care is needed to ensure that the ozone degrades back down to O2. And some cultivators struggle with [that].”

“It comes out of our system, and they’re like, ‘Well, this doesn’t smell like I had anticipated.’ But it takes a couple days.”

But while it may temporarily mask coveted cannabis aromas, ozone’s pungency also has its benefits. The gas has been used commercially for decades to remove bad odors – and bad odors are exactly what some cannabis cultivators are currently contending with on the US’s west coast.

“Ozone generators can be put in homes, offices, cars [etc.], to get rid of that really pungent smell of smoke or cigarettes,” Ellsworth says. “And so as we were starting to see the fires explode along the west coast, we really started to dig in and determine is this something that we can do. If cannabis has been subjected to the aroma of smoke because wildfires were close, is this something we can get rid of?”

The west coast wildfires ravaged many of the cultivation operations in California and Oregon in September and October. Even the businesses lucky enough to be spared from the blaze are reeling from its effects. For miles around, soot from the fires contaminated thousands of crops. But these plants could still be salvaged, says Ellsworth. 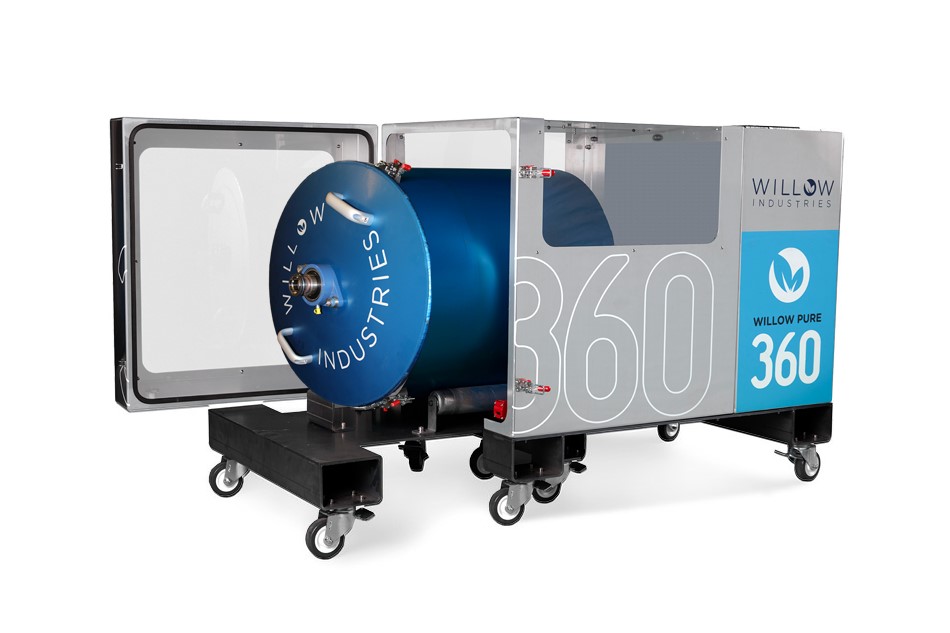 “We have a facility in California where we bring in product,” she continues. “We clean it on site, and then send it back to the distributor. And in the past, we’ve focused only on microbials. With this new opportunity, we started bringing in product that has been essentially damaged by smoke smell. And right now, we’re going through the process of trying to get rid of that.”

“There’s a lot of cultivators that are dealing with this right now. And so, for us, it’s more of a goodwill for the industry. What can we do?”

Of course, with thousands of acres of crops affected by the wildfires, it’s going to take more than a couple of Willow Industries’ ozone boxes to cleanse all that cannabis. Fortunately, Ellsworth and her team have just upped their capability.

“Our new system [is] called the Willow Pure 360,” says Ellsworth. “Instead of the chamber with trays, we have a drum. So, you put all the cannabis in this drum and [it] slowly turns. And when I say slowly, it makes a quarter rotation every five minutes.”

“But you’re going to see a more even saturation and dosing of ozone throughout the cycle,” she explains. “With this type of method, we’re decreasing our treatment time. So, you’re going to go from 12 hours to about a 4-hour treatment. [And] when the product is done, you’re not going to have that post-Willow ozone smell. The product comes out and it immediately has its full terpene profile present.”