Across the globe, cannabis is slowly becoming more widely accepted as a useful medicinal product and a mainstream commercial good. But with this comes an increased need for better safety testing, standardization, and quality control.

Due to their health conditions, many medical cannabis patients will be more vulnerable to the risks presented by impurities or residual contaminants of cannabis flower, and those with weakened immune systems will be particularly at risk. With these vulnerabilities in mind, it’s crucial that all cannabis products are properly tested and screened for impurities.

Pesticide residue analysis is just one facet of an effective cannabis testing program, but it’s vitally important. As many cannabis pesticides are commonly used elsewhere in the food and agriculture industries, their ingestible effects and risks are well understood. But comparatively little is known about the risks they present when they’re combusted prior to cannabis consumption. With these risks so ill-defined, pesticide residue analysis is vital to cannabis users’ safety.

In the United States, the regulatory requirements surrounding cannabis pesticide testing vary from state to state, as the federal prohibition of the drug prevents any national agencies from publishing guidelines as to how treat cannabis.

This lack of consensus has resulted in a stark difference between the number of pesticides that are required to be screened for in different states. For example, Colorado and Nevada require cannabis testing labs to monitor the levels of 15 and 24 different pesticides, respectively. By comparison, state regulators in Oregon require the monitoring of 59 pesticides, and California’s pesticide list extends to 66.

As well as differing in the number of pesticides that must be screened for, it’s also common for different states to set different ‘action limits’ on how much pesticide residue there can be on a cannabis sample before the product is deemed to fail its testing.

Elsewhere in the world, in places where cannabis is no longer prohibited at the federal level, testing can be done differently. In Canada, the federal health agency Health Canada has published a list of nearly 100 different pesticides that must be monitored for. This list, the agency says, was compiled based on current pest control products that have been previously found on cannabis samples in Canada or the United States, or that are known to generally present a risk to health.

Health Canada also maintains a searchable list of all laboratories that are licensed and able to provide these testing services, thus ensuring a nationwide standard for cannabis testing quality.

In regions without such strong federal oversight, the lack of consensus over exactly which pesticide residues need to be monitored has left many analytical laboratories to develop their own analytical methods that satisfy local rules.

“Because of the way that the industry has developed without a lot of available unified methods, many groups have developed their own best extraction techniques and methods for doing analysis,” Ben Armstrong, lab director at Juniper Analytics LLC, tells Analytical Cannabis. “People have made really concerted efforts to develop really strong methods.”

Generally, the pesticide analysis workflow in the laboratory consists of some sort of extraction step, designed to extract any residues from the solid cannabis flower or leaf being tested, followed by a cleanup step. This cleanup step is important for removing any pigments that may have also been removed during the initial extraction, which might obfuscate the pesticide screening results.

“For the extraction, people are mostly using either acetonitrile or an acetonitrile QuEChERS-based method that was developed by the food industry,” Armstrong explains.

QuEChERS is a portmanteau for “quick, easy, cheap, effective, rugged, and safe,” and is a widely popular solid phase extraction method. It was originally developed to analyze multiple pesticide residues at once on fruit and vegetables, but has been adapted for use across multiple different industries as a way of extracting pesticides, including the cannabis industry.

“A lot of the Oregon analytes have an action limit of around 200ppb [parts per billion], and so the analysis step has traditionally been performed on an LC-MS/MS [liquid chromatograph with tandem triple quadrupole mass spectrometer],” says Armstrong. “There are a handful of compounds that are more amenable to a GC-MS [gas chromatography mass spectrometry] analysis, and so there are quite a few groups that are utilizing a GC-MS to analyze those compounds as well.”

Normally, GC-MS uses a high-temperature injector, making the method unsuitable for general pesticide residue analysis as some of the more thermally unstable compounds present in the extract will degrade rapidly during analysis and may not be detected. This has been the driving factor behind the rise of LC-MS/MS and UHPLC-MS/MS (ultra-high-performance liquid chromatography with tandem mass spectrometry) as the go-to analysis methods for pesticide residue analysis. It’s now even more common for labs to offer both LC and GC-based analysis methods to capture the widest possible array of pesticide residues present on a sample.

But no matter what testing approach a laboratory prefers, they will normally be required by local laws to internally validate their methods to ensure they’re fit for purpose before they can obtain a state cannabis testing license.

“We had to perform third-party proficiency testing, so we were sent blinded [cannabis] samples with unknown amounts of a subset of the pesticides on the regulatory lists, and we had to analyze those samples and identify those pesticides within a specific range,” Armstrong explains. “We also had to pass two proficiency tests, as well as perform the method validation and provide all of that documentation to [Oregon’s accrediting body], which is the Oregon Environmental Lab Accreditation Program.” 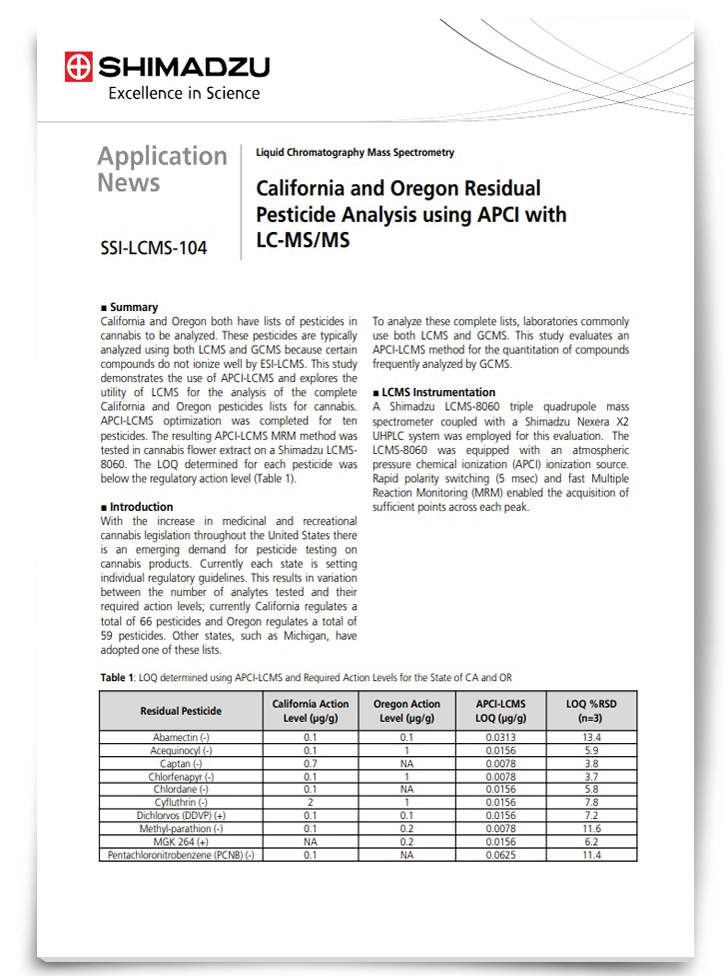 With the increase in medicinal and recreational cannabis legislation throughout the United States, there is an emerging demand for pesticide testing on cannabis products. Currently each state is setting individual regulatory guidelines. This results in variation between the number of analytes tested and their required action levels. Download this app note to discover an APCI-LCMS method for the quantitation of compounds frequently analyzed by GCMS.

Download App Note
What are the biggest challenges for pesticide testing in cannabis?

The cannabis plant is an extremely complex matrix, containing more than 400 distinct chemical compounds and over 60 cannabinoids. And it’s this complex matrix that appears to be providing the largest set of complications that analytical testing labs must try to overcome.

“Even at the molecular level, one strain of flower – let’s say, a Gorilla Goo strain of flower, is actually quite different to a Blue Dream or another strain that you would find, just due to the unique number of compounds that cannabis has. We’re still learning a lot about the varietal and what the compounds are that they’re producing, but because of [these compounds], when you’re looking at a parts per billion level for pesticide analysis, you run into matrix interferences,” explains Armstrong.

“Over time, us [sic] and many other groups like us, have continued to refine the methods and make small changes to the LC parameters to help negate some of those matrix effects.”

As well as studying these matrix interferences, analytical scientists are also now looking to analyze the effects of different cannabis extraction solvents and techniques on the accuracy of pesticide residue screening.

“There’s still a real need for getting a better clean-up protocol. If you take flower or extract and you prepare it with a known amount of pesticides in there, you’ll often see that many of those analytes are suppressed to lower levels than what you know you introduced, and a couple may show up higher,” Armstrong explains.

“If we could figure out what the compounds are that are causing enhancement or suppression, and develop better clean-up methods for the preparatory steps, it would make the analysis a lot cleaner.”